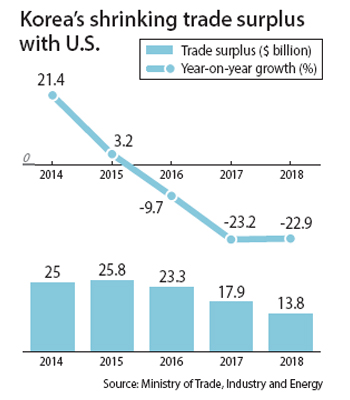 Today marks the seventh anniversary of the Korus FTA.

According to the Ministry of Trade, Industry and Energy, trade last year between Korea and the United States grew 10.3 percent to $131.6 billion. This was the fastest growth in trade between the two countries since 2014, when the total rose 11.6 percent.

The ministry said the achievement was notable as the expansion took place during a period of intense trade conflict between the United States and China. The United States is now Korea’s second-largest trading partner, accounting for 11.5 percent of the total. China is the largest, with 23.6 percent totaling $268.6 billion.

Despite the expansion of trade, Korea’s trade surplus with the United States last year fell 23 percent to $13.8 billion. The total surplus was the lowest since the FTA was signed.

It is even smaller than the $15.2 billion surplus reported in 2012, the first year of the Korus FTA.

In quantity terms, crude oil imports from the United States increased 354 percent from 13.4 million barrels in 2017 to 60.9 billion barrels last year. The LPG import increase was largely the result of United States raising production of shale gas. U.S. President Donald Trump has been vocal in his criticism of trade deficits with large, industrialized economies, including Korea, Germany and Japan.

Trump called the FTA signed by U.S. President Barack Obama a “horrible” deal, and his administration threatened to impose a 25-percent tariff on steel. The Korean government renegotiated the FTA, the new agreement signed in September. During the meeting between Trump and Korean President Moon Jae-in, Trump said it was a “great day” for both countries.

“From day one, I promised the American people that I would renegotiate our trade deals to ensure that our agreements were fair and reciprocal,” said Trump.

The biggest change in the FTA revision last year was the widening of opportunities for American cars in Korea. The Korean government agreed to accept U.S. safety standards on U.S. vehicles rather than applying Korean safety standards. Last year, U.S. car imports rose 8.8 percent to $1.8 billion. This is a turnaround from the 2.9 percent decline in 2017 to $1.68 billion. During the same period, Korea’s automobile exports shrunk 6.9 percent.

The Korean government said the increase in U.S. auto imports wasn’t a result of the renegotiated trade agreement as it takes effect this year.