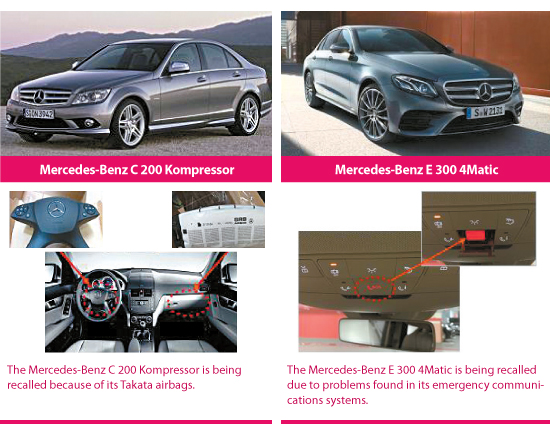 The government is recalling 73,512 imported vehicles from eight different brands, and slapping Mercedes-Benz and Porsche with fines for failing to meet Korean safety standards.

The vehicles - from 103 different models - include an electric car.

According to the Ministry of Land, Infrastructure and Transport, the fines will depend on the improvements Mercedes-Benz and Porsche come through on.

Under the law, the government can level fines equivalent to one-hundredth of an automaker’s revenues in Korea, with a cap of 10 billion won ($8.8 million).

According to the ministry, Mercedes-Benz has the largest number of both models, 64, and vehicles, 47,659, recalled.

The Mercedeses are being recalled for five different reasons.

Over 37,562 vehicles in 42 different models, including the E 300 4Matic, are being recalled for problems found in their emergency communication systems, which connect to the company’s emergency center in case of an accident.

The ministry said the emergency call system could fail, resulting in delays in rescuing drivers and passengers.

Some had more serious problems with steering wheels, airbags and headlamps.

The airbags in 742 vehicles, made by Japan’s Takata Corp, were found to have problems with inflaters that could lead to metal shrapnel harming drivers and passengers. 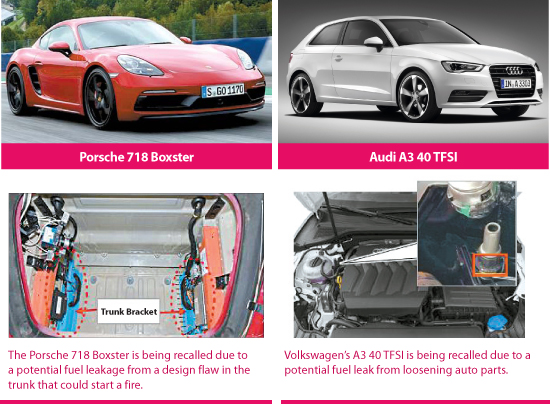 BMW, which had major problems last year with its vehicles in Korea catching fire, is recalling a total of 19,958 vehicles across 25 models.

The government recalled five Porsche models, including the 718 Boxster, and a total of 3,889 vehicles.

According to the government, 2,315 718 Boxsters and 718 Caymans have a design flaw. In case of an accident, a bracket in the vehicles’ trunks could collide with fuel tanks.

Renault Samsung’s SM3 Z.E. was the electric vehicle recalled. The government is recalling 1,371 SM3 Z.E. models after an error in its controller software was found. When driving at speeds of 4 kilometers per hour (2.5 miles per hour) or less, the motor comes to a full stop if the brake is hit gently.