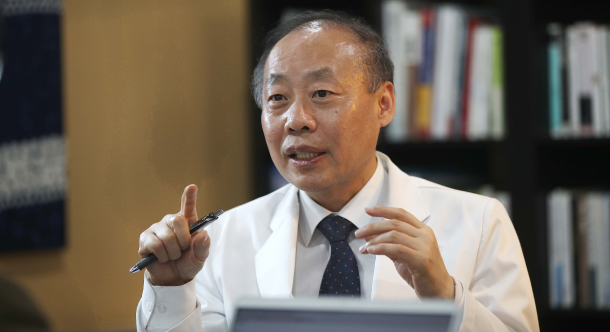 “Recently, fine dust is becoming severe. Before, when the level was high, fine dust lasted two days at maximum, but this time it has lasted for a long time,” said Hong, 59. He said that the reason why people cough is because of fine dust. He said fine dust does not only influence respiratory organs but also influences every part of the body, including the brain. According to Hong, 11,900 people die prematurely a year due to fine dust.

Below are edited excerpts of our conversation.


Q. How did you find the number of premature deaths?

A. We compared the average level of fine particular matter according to the regions of the dead. If you analyze the data statistically, the number of premature death is revealed. The number 11,900 was officially announced in the thesis. If fine dust accumulates chronically, blood vessels can weaken or cause arteriosclerosis, which can make a person die earlier. Specifically, the cause of most premature deaths was a brain disease like strokes, which accounted for 47 percent, cardiac disorder at 28 percent and lung cancer at 20 percent. The average life span of Koreans was estimated to be shortened by around six months.


Apart from lung cancer, it is not certain whether cerebrovascular diseases like strokes are related to fine dust.

Fine dust and fine particulate matter is a chemical substance. This causes inflammation in the lungs. In the blood vessel, it makes blood clots and impedes the flow of blood, which becomes the cause of heart disease.


Is there any other research that fine dust influences other brain diseases?

The World Health Organization officially announced that lung cancer, chronic respiratory diseases, cardiac disorders and strokes are all influenced by fine dust. It is also related to all sorts of brain diseases like dementia and depression. We research heavily on the brain. We are also researching its relation to dementia as well. In foreign countries, statistical research papers that say fine dust is related to dementia have come out.


Before, depression was also mentioned.

We researched senior citizens over 65 years old in Korea and announced the results in 2012 and 2016. There is a clear correlation between fine dust level and depression. If the fine dust level goes up, the number of those who are hospitalized due to mental illness goes up. There are even studies that suggest fine dust raises the risk of suicide by four times.


In what kind of process do fine dust and fine particular matter influence the brain?


Is dementia caused by the same reason?


Can you explain what oxidative damage is?

If chemical substances like fine dust enters the body, the body tries to let it out. Through this process, reactive oxygen is produced as a byproduct. As such, fine dust causes oxidative damage, thus possibly causing dementia.

There is a very small schism in the bone between the nose and brain. If it is fine particulate matter, the fine dust can go in. Research from Europe says that it actually goes in [the brain]. If that happens, toxic components can attach to the brain and directly influence it.


Then should we also worry about the developing brains of children?

There are hundreds of papers that suggest fine dust and fine particulate matter can cause low birth weight.


It seems that research on fine dust and the brain has increased.

In Korea, social stress is getting higher, and due to the graying population, [the rate of] dementia and brain disease [is] also increasing. If the element of fine dust is added in, the danger becomes bigger. Greater awareness is better.


What kind of influence do pregnant women and fetuses receive from fine dust?

We have already known [about its effects on fetuses] since the 2000s. Babies born in places where the fine dust level is high were 30 grams (1.05 ounces) lighter. It also causes premature deaths.

Thirty grams is a statistical average. It could be less, but there are babies who are influenced by this weight [difference]. It is not an issue to be taken lightly.


This means that a decade ago, you had already confirmed the [dangers of the] fine dust problem. Did you request measures from the government?

The government also knew. So a Special Act related to improving the air quality in capital areas in 2005 went into effect. Introducing compressed natural gas buses was a follow-up measure.


I remember this being in the national spotlight in 2010.

The announcement from the World Health Organization in 2012 was a trigger. Premature deaths due to air pollution amounted to seven million. Awareness in Korea rose as the quality of air worsened. In 2005, a law to improve air quality in the capital area went into effect and it became better, but it has gradually worsened since 2012.


What do you think is the reason?

Since 2012, thermal power generation has gone up. Recently, the level of fine dust and fine particulate matter level has improved little.

I think it is because the fine dust is concentrated. That is why I don’t believe the number has improved.


When the fine dust level is high, some claim that it is the equivalent of everyone smoking several cigarettes a day. Could you really make that comparison?

The substance that comes out from a small diesel vehicle is almost the same as cigarettes, except that there is no nicotine. The average level of actual fine particulate matter is like smoking one cigarette a day.


Do you think Korea is pursuing its fine dust reduction plan well?

Ministry of Environment said it will reduce fine dust by 45 percent. It is impossible for our country to reduce it [to this level] if the level of fine dust is as high as that of China. In addition, 60 percent of the fine dust comes from China. But reducing the level to 45 percent is like hitting the jackpot. We do not need a big jackpot but rather a meticulous plan.


What is the government losing?

Europe already signed a multilateral agreement [with other countries] to reduce pollutants from being released into the air called the Convention on Long-Range Transboundary Air Pollution. From sulfur oxides, which cause acid rain, to fine dust, many materials were included as pollutants. Northeast and Southeast Asian countries should be doing this as well.


Do you think Southeast Asian nations will take action [against fine dust]? Do you think that China would feel the pressure?

Fine dust from Indonesia is a problem in Singapore and Malaysia. Vietnam is suffering from the same problem because of Myanmar. We need to suggest a multilateral agreement to make them work together. If a lot of countries get involved, China will feel the pressure.


Is there any part where domestic research is lacking?

Research on acute forms of diseases [related to] fine dust are lacking. This is about people dying in five days or getting an acute disease because of fine dust. Special problems appearing when the [fine dust] level is high has not been dealt with.


What should people specifically do when fine dust is high?

I recommend people to drink a lot of water, which reduces toxicity and improves the bloodstream. Eating a lot of fresh vegetables with vitamin C is great. Vitamin C prevents oxidation damage.