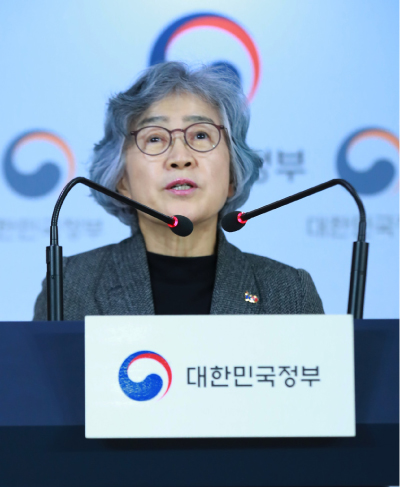 The head of the government’s anti-corruption agency said Thursday that her commission transferred evidence regarding Seungri’s Burning Sun case to prosecutors, not the police, due to allegations that police officers colluded with the K-pop megastar to cover up crimes at his nightclub in Gangnam District, southern Seoul.

Pak Un-jong, chairwoman of the Anti-Corruption and Civil Rights Commission, told local reporters at a luncheon in Gwanghwamun, central Seoul, that she could have sent the evidence to the police, which is currently investigating the scandal surrounding Seungri, whose real name is Lee Seung-hyun. Yet she decided not to do so because her commission thought it was “right” to have prosecutors look into the case.

The watchdog transferred evidence it received from a lawyer last month to the Supreme Prosecutors’ Office Monday, despite several requests from the police to hand over the information to them. Pak’s comment on Thursday - about possible collusion between the police and Seungri, as well as the commission’s decision to transfer the evidence to prosecutors - adds weight to suspicions that the police allowed Seungri to get away with offering prostitutes to foreign investors and sell drugs at Burning Sun for years.

Pak did not elaborate on the evidence, citing the need to protect the whistle-blower. But local broadcaster SBS reported last week that a person submitted conversations shared on the mobile messaging app KakaoTalk from Seungri that show him arranging prostitutes for foreign investors who were about to visit Seoul to the anti-corruption commission on Feb. 22.

The news agency gave no information on the source, but said that the sordid conversations, which date back to 2015, indicate Seungri ordered employees at Burning Sun, which he had a stake in, to impress investors with prostitutes at a different club in Gangnam.

The person who submitted the Kakao chats to the commission revealed himself this week to be a lawyer named Bang Jeong-hyeon. Bang appeared on a CBS radio interview on Wednesday, saying he handed over the texts on behalf of an anonymous person who emailed him about the suspicions. Bang claimed that Seungri’s chats with other Korean celebrities showed not only evidence of sex crimes but also a “cozy relationship” between them and top police officers, one of who is “higher” than the rank of the Gangnam Police Precinct chief. Bang said he decided to provide the chats to the commission instead of the police because some police officers had been accused of colluding with Seungri, a former member of Big Bang, who announced his exit from the world-famous boy band on Monday via Instagram. Burning Sun shut down in mid-February as the scandal began to mushroom.

Pak, the head of the anti-corruption agency, said Thursday during the luncheon that the allegations in the Seungri scandal are “credible” and in need of an “urgent” response, which is why her commission transferred the case to the prosecution.

On Thursday, Justice Minister Park Sang-ki said that the case has been sent to the Seoul Central District Prosecutors’ Office, but that prosecutors have yet to decide whether to directly launch a probe of their own or direct the ongoing police investigation.

If it turns out that a high-level police officer did turn a blind eye to the misdeeds, the revelation could impact the Blue House’s drive to shift investigative power from the prosecution to the police.