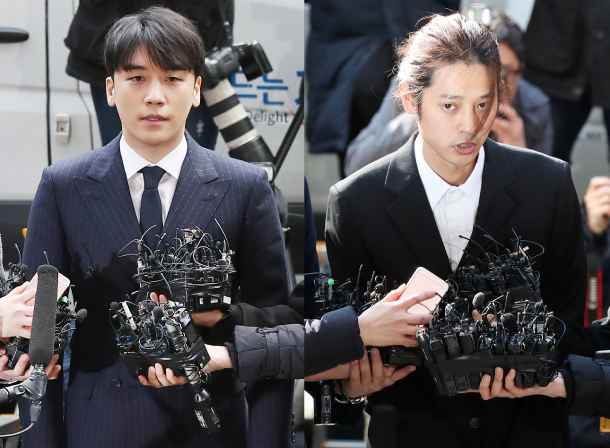 K-pop star Seungri, left, and singer Jung Joon-young, right, turn themselves in to be questioned at the Seoul Metropolitan Police Agency on Thursday. Seungri is suspected of offering women for sex to potential investors and Jung is accused of shooting and distributing sex videos without the consent of the women in them. [NEWS1]

Seungri, the youngest former member of Big Bang and a successful entrepreneur, was summoned as a criminal suspect on charges of offering women for sex to potential investors. When he was first questioned about the allegation on Feb. 27, 2019, he denied all charges.

“I will offer truthful answers and cooperate with the investigation,” the 29-year-old singer said as he entered the police compound on Thursday. Seungri, whose real name is Lee Seung-hyun, said Monday he would retire from the entertainment industry and apologized to the public for the scandal.

The police said they are investigating Yu’s alleged connection to the high-level police officers and his suspected involvement in offering sex services to investors.

Earlier in the morning, the police summoned Jung, accused of shooting and distributing sex videos without the consent of the women in them in 2015 and 2016. “I apologize to the public,” Jung said. “I will faithfully submit to the questioning.”

Over 100 journalists came to the police compound in central Seoul to report on the scandal, which now includes allegations of a serious connection between Yuri Holdings and top police officers, possibly a commissioner general.

Earlier this week, SBS aired a series of reports on raunchy KakaoTalk group chats among eight people including Jung and Seungri. The broadcaster said Jung had taken sex videos without his partners’ consent and shared them in the same group chat.

On Tuesday, Jung issued a statement admitting those charges and apologized. He said he, too, will retire from show business.

The police questioned Jung about possible sex crimes in 2015 and 2016 and asked if he had continued to commit similar offenses since then. A drug test was also administered.

“We are questioning them all on the same day because we don’t want them to coordinate their statements,” said a police official.

Sources said Yu refused to face photographers and journalists, stressing that he is not a public figure.

Little is known about Yu, who established Yuri Holdings with Seungri in 2016. The company’s name is a combination of Yu and the final syllable “ri” in Seungri.

Yu was suspected to be close with the police. Earlier in the morning, Bang Jeong-hyeon, the lawyer who first exposed the alleged criminal activities by the celebrities in February, said there was a strong suspicion that Yu had a relationship close enough to exchange text messages with a police commissioner general.

The lawyer discussed the allegation that police had overlooked illicit activities by the celebrities and criminal activities at the venues operated by Yuri Holdings in an interview with CBS Radio on Thursday.

Bang obtained records of the controversial Kakao chats, which took place over eight months between 2015 and 2016, from a whistle-blower, and had offered the records to the government’s Anti-Corruption and Civil Rights Commission.

One participant in the group chat wrote that he had seen Yu exchanging texts with the police commissioner general on the previous day and was impressed, Bang said.

“It is true that there was a connection,” Bang said. “Unless this conversation is false, it is circumstantial evidence that they are close enough to text each other.”

According to the police, a KakaoTalk chat made around July 2016 mentioned that the police commissioner general “got their backs.”

Although the Korean text misstated the title, the police suspect that it was referring to the head of the National Police Agency. Kang Sin-myeong, who served in the post at the time, has denied any connection to the case.

Yu was also suspected of using his police connection to cover up a drunk driving case involving one participant to avoid media coverage.

In one of the chats, Choi Jong-hoon, a guitarist in the band FT Island, said, “Chairman Yu saved me,” after he was stopped by the police for drunk driving in 2016. Seungri replied, “Don’t think he will stop another drunk-driving case. [Yu] spent his money to gag [the police].”

In the interview with CBS, Bang also said Thursday that there were suspicions of massive tax evasion by the businesses operated by Seungri and his friends. He said an investigation must be conducted on those suspicions.

“When I made the report [to the Anti-Corruption and Civil Rights Commission], those suspicions were all included,” he said. “The Supreme Public Prosecutors’ Office will have a thorough investigation.”

The participants in the group chat, including Jung, Seungri and Choi, jointly opened a bar in Gangnam District, southern Seoul, in May 2016. They also operated other nightlife venues.