The Blue House’s new nominee for unification minister found himself in hot water this week over a series of controversial political comments he made in the past.

Kim Yeon-chul, the head of the Korea Institute for National Unification, was nominated by President Moon Jae-in as head of the Unification Ministry last week.

He openly denigrated politicians both on the left and right in dozens of posts uploaded to his personal Facebook page and public comments over the past few years.

In one post from March 2015, Kim openly derided Moon, then a lawmaker, for visiting a military base in uniform, saying he was putting on a publicity stunt that did not help the country’s national defense. 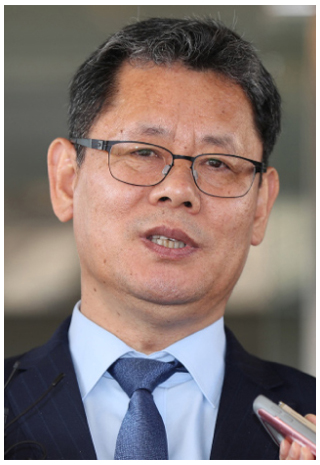 Such derision of top figures in the ruling party may drain support for Kim in the DP during what is expected to be a harrowing confirmation hearing at the National Assembly on March 26.

The opposition has already implied it will launch an unforgiving offensive against his appointment as Unification Minister.

The main opposition Liberty Korea Party’s floor leader, Na Kyung-won, called on the Blue House to withdraw his nomination in a speech at the legislature on Tuesday.

Kim made a statement that riled up the conservative opposition during an interview he conducted with a local online newspaper in February last year, in which Kim called the Lee Myung-bak and Park Geun-hye administrations “conservative forces that lack historical legitimacy.”

“Even the military regimes - which can be called the ‘original conservatives’ of Korea - saw the big picture in terms of the situation on the Korean Peninsula, but the Lee and Park governments are different,” he said. “[The two governments] denied the very necessity of inter-Korean dialogue, leaving the North as a mere political tool for domestic use.”

In a collection of conversations published in a 2015 book, Kim also questioned whether it was valid for Seoul to sanction the North over the sinking of the Cheonan warship by a North Korean vessel in 2010.

“How can we receive an apology from the North when they are saying they did not [sink the Cheonan]?” wrote Kim.

Kim, who was a policy advisor to former Unification Minister Chung Dong-young from 2004 to 2005, also called the Park administration’s decision to publicize the transcript of the 2007 inter-Korean summit a “treasonous act” in a social media post from 2013.

These comments have raised questions about his political views, which are expected to be a major sticking point in his confirmation hearing.

Kim’s outspoken commentary relative to previous nominees has led to doubts, even from DP lawmakers, about the Blue House’s vetting process.

On Tuesday, Kim put out a statement on the controversy over his past comments, saying that he “regretted using certain unrestrained and inappropriate expressions regarding North Korea policies and inter-Korean relations” and that he would “be careful” with his language in the future.