The new chief of the main national athletic training center vowed on Thursday to restore pride and trust for athletes after a series of assault scandals rocked Korea’s sports community. 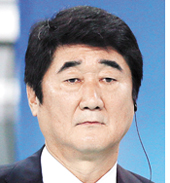 “We’re doing our best to restore trust,” Shin said to reporters at the National Training Center. “I’ll make sure that our training center becomes a place where people can respect each other. It will be a training center where athletes can restore their pride.”

Korea’s sports community in recent months was hit by sexual and violence scandals involving coaches and athletes, with some claiming they were abused at the national training center.

Last month, the national training center expelled short track speed skater Kim Gun-woo for trespassing in the female dormitory. Shin said such incidents should serve as an example to other athletes.

“The rules in the national training center are not difficult to follow, but some athletes just don’t think too seriously,” he said. “To solve problems inside the center, I’m meeting lots of athletes and coaches. We’re also doing meetings and surveys regularly with them.”

With the 2020 Tokyo Olympic Games less than 500 days away, Shin encouraged the athletes at the training center.

“I think we have a stronger team than we had at the 2012 London Olympics,” said sabre fencer Gu Bon-gil, who won team gold at the 2012 Summer Games.

“In Tokyo, we will win a team gold, and personally, I’ll try to win another gold in the individual competition.”