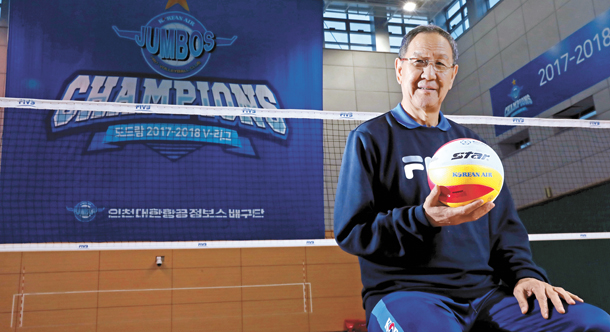 The Incheon Korean Air Jumbos have once again set their sights on defending their Korean Volleyball Federation championship title for the 2018-19 season. If they pull it off, the club will win the regular and playoff titles for the first time in the same season and hold the crown for a second straight year. 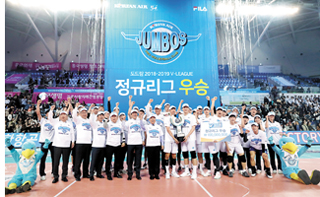 Behind the success of the Jumbos is manager Park Ki-won. At 67, Park is the oldest manager in any professional sport in Korea and the amount of experience he brings to the team has paid off for the Jumbos. This year, the team took the regular season title with a game in hand.

Park is not only the oldest manager, but also one of the most competitive when it comes to winning. Due to the physical requirements of his job and the stress it involves, Park quit smoking and drinking when he was appointed as the head of the Jumbos in 2016.

“Since I’m playing a mental game throughout all five sets on the court, when it’s over I feel drained,” Park said.

Every morning, Park gets up at 6 a.m. and heads to the court. He eats breakfast with the players, and on days where there isn’t a game to play, he analyzes the match videos and leaves the gym at around 10 p.m.

“The trends in volleyball change every day,” Park said. “No matter how experienced the manager is, if they don’t study, they’ll fall behind.”

The biggest change Park made to the team was in serving. Starting in 2000, aggressive serves became more popular in international volleyball, but in the V league, they continued to emphasize accuracy over power.

However, once Park started coaching the team for the 2016-17 season, he asked his players to get more aggressive.

“A strong serve is the way to an easy win,” Park said.

The new approach wasn’t immediately successful. During the Cup tournament in 2017, the Jumbos recorded an embarrassing 35 serve errors.

“We received bad reviews from the club, but I told them not to think about it and just continue to make strong serves,” Park said.

By going their own way, the Jumbos have finally seen improvement. Up until the 2015-16 season, the club won just 1.06 points per set in serves. This season, that number increased to 1.49.

Looking at Park’s playing career, he started volleyball later than others - in eighth grade. Despite the late start, Park was good enough to be added onto the national team as he competed at the 1972 and 1976 Summer Olympics. In addition to the Olympics, Park helped Korea win gold at the 1978 Asian Games in Thailand and was a part of the national team when it finished fourth at the 1978 World Championships.

Following his national team appearances, Park played in the Italian league, becoming the first Korean male volleyball player to do so. When he ended his career as a player, Park continued working overseas as a coach for about 30 years.

As a result of his time outside Korea, Park tends to have a more liberal approach when it comes to coaching and the team environment. When he first joined the Jumbos, he worked hard to change the team’s culture from a very hierarchical system to a flatter management structure.

In terms of running-base training, he let the players to do their own thing. He also allowed married players to stay at home rather than forcing them to live together in dorms.

Rather than telling players they had to win, Park encouraged them regardless in order to take some of the pressure off.

As a result, the Jumbos won the championship series last year, and this season they comfortably won the regular season title. He has also recruited two female coaches for his team, the first men’s volleyball team to do so.

“Looking at the European clubs, they just appoint female coaches,” Park said. “If they have the same skill and coaching ability, then the female coaches can make the team environment a lot smoother.”

The Jumbos will start their championship game on March 22 against either the Cheonan Hyundai Capital Services Skywalkers or the Seoul Wooricard Wibee. The Skywalkers and Wibee will play their series in a best-of-three format starting today at 2 p.m. in Cheonan, South Chungcheong.

The championship series will be played in a best-of-five format.