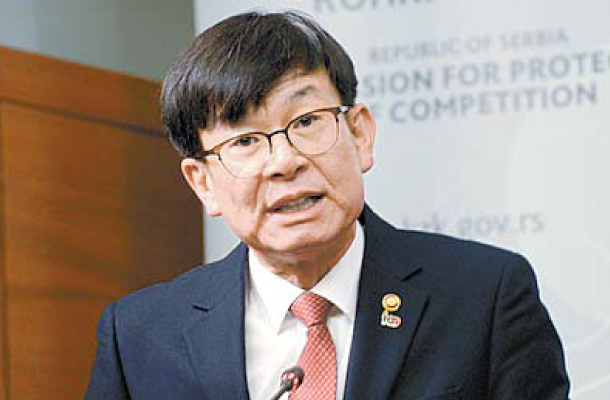 The head of Korea’s corporate watchdog called for a common response among countries to anticompetitive behavior by global tech companies, arguing that minimal or fragmented regulations could lead to more harm.

The chairman proposed an international counseling body beyond the current system of exchanging opinions among agencies to respond to dominant market players.

“The global search market is dominated by Google, online transactions by Amazon and the social network market by Facebook,” explained Kim, speaking on the theme of the rise of global market powers.

“To respond to the crisis of minimal regulation, it is necessary for a joint response between antitrust agencies through the international antitrust law community.”

Speaking at a conference attended by antitrust officials from around the world, Kim cautioned against varying responses from the watchdogs on similar issues.

“Through the use of big data, new types of unfair activities unseen in the past such as price differences between individuals and algorithmic collusion have emerged,” said the antitrust chief.

“If responses to an identical action are different by agency, this will create more confusion and uncertainty in the market and have a negative influence on encouraging reform from companies.”

Kim argued that antitrust agencies should consider the impact of not only excessive regulation but also minimal regulation, and said that concerns against too much regulation are outdated.

“If we are concerned about excessive regulation and continue to rely on the past paradigm, we could face a situation that we can no longer control,” said Kim.

In 2013, a U.S. Federal Trade Commission investigation found that Google did not violate antitrust laws over allegations of bias in its search results.

In 2017, the European Union fined Google 2.4 billion euros ($2.7 billion) for similar issues. Scrutiny of alleged antitrust behavior by major tech firms has been on the rise.

In his speech, Kim said he was wary of Warren’s plan, noting that such a drastic measure could hurt consumers.

Nicknamed the “chaebol sniper” for his criticisms of large conglomerates in Korea, Kim maintained his stance in Berlin.