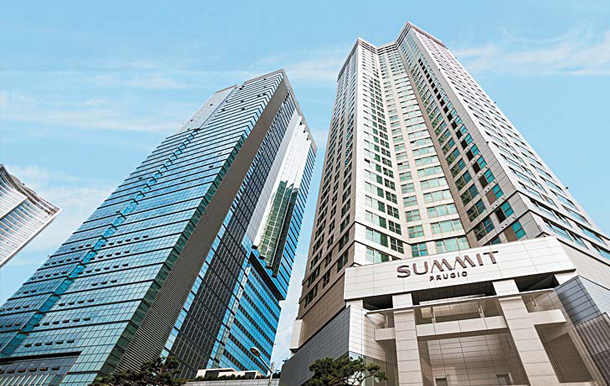 The number of apartments in Seoul subject to the comprehensive real estate tax is up 50 percent as assessed values rose at the fastest rate in 12 years.

According to the Ministry of Land, Infrastructure and Transport late Thursday, the average assessed value of apartments in Seoul increased 14 percent for 2019. It was the largest increase nationwide.

Apartments valued at over 900 million won ($792,170) are subject to the central government’s comprehensive real estate tax.

The government said the increase in the assessed values was largely the result of increases in the market values of high-end apartments. The real estate market was overheating until the government introduced cooling measures last September. 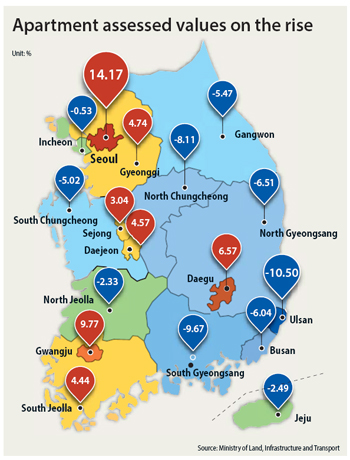 The rise in assessed values in Seoul was the highest since 2007, when prices rose 28.5 percent.

While values were up in the capital, elsewhere in the country, especially in the Rust Belt, values declined.

In Ulsan, which has been heavily hit by the ongoing restructuring of automakers and shipbuilders, values dropped 10.5 percent. The city is the home of Hyundai Heavy Industries, a major maker of ships, and Hyundai Motor’s largest car factory.

The government-assessed value of apartments nationwide rose 5.32 percent, the fastest year-on-year increase since 2016, when the figure was 5.97 percent. Values have risen more than 5 percent for two consecutive years.

The government noted that it did not raise the assessed-value-to-market-value ratio despite having adjusted the ratio for standalone houses and land. It kept the ratio for apartments at 68.1 percent.

“The ratio for apartments is already higher than for standalone houses, which is at 53 percent, and for land, which is at 64.8 percent,” said Lee Moon-ki, head of the Land Ministry’s housing and land office. “We have changed assessments this year only on changes in market prices.”

It was mostly high-end apartments that were revalued as prices increased the most in this category.

With assessed values higher than last year, the tax burden is expected to go up, especially as the comprehensive real estate tax rate has been increased as much as 0.7 percentage points.

Owners with multiple apartments will pay as much as 0.5 additional percentage points.