Mamamoo is back with an energetic sound: The four-member girl group rounds out their year-long EP project on a high note

Mamamoo is back with an energetic sound: The four-member girl group rounds out their year-long EP project on a high note 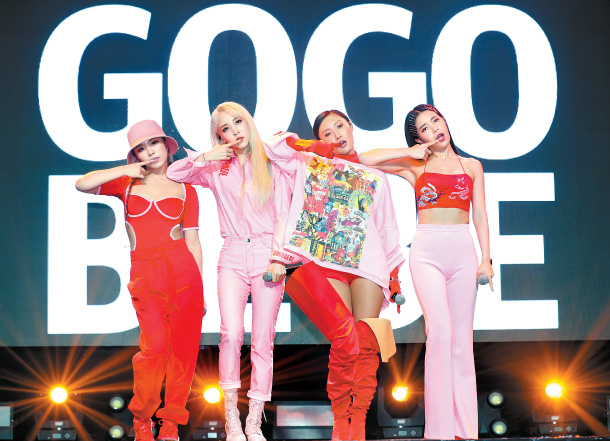 Girl group Mamamoo performs its new song “gogobebe” for the first time on Thursday afternoon at the Yes24 Muvhall, western Seoul, at the showcase for its new EP “White Wind.” [NEWS1]

Yellow, red, blue and now white - girl group Mamamoo finished off its “Four Season Four Color” project on Thursday with its latest release, “White Wind,” its ninth EP and the last of the four-part project that it began last year. Once again showing off its powerful vocals and energizing performances, Mamamoo performed its new songs for the first time before local press on Thursday at the showcase it held at the Yes24 Muvhall, western Seoul.

Although Mamamoo is best known for such lively and upbeat songs as “Mr. Ambiguous,” “Um Oh Ah Yeh” and “Yes I Am,” the group has also shown it is more than capable of pulling off deeper, more emotional songs with such recent releases as “Starry Night” and “Egotistic” off of its latest EPs. Yet for the final EP of the four-part series, Mamamoo is back to what it does the best.

“We have recently showed our more emotional and mature side. But we came back to a more Mamamoo-like liveliness in which we all have fun together,” said Hwasa.

“We communicate a lot with our fans when we decide on a new song or an album,” said Solar. “We did have the name of our EP already decided in advance. But the fans told us that even though they liked the songs we did as part of the ‘Four Color’ project, they wanted to hear us sing something lively, like ‘Um Oh Ah Yeh.’ So we decided we would do a song that’s more energetic.”

If anyone doubted the group could return to its upbeat form, “gogobebe” is sure to prove them wrong. The Latin-reggae pop track fans have already dubbed “the going home after work on a Friday night” song will have listeners dancing - or at least secretly tapping along to the beat because of the energy it gives off - according to Wheein.

“This song has the strongest dance energy off of this EP,” said Wheein. “And I hope that it’s enough to have listeners dancing inside just like we are.”

The song will lighten people’s steps on their way home on a Friday night, added Moonbyul. “We all spend our Friday nights hanging out because we know we can rest the next day. It’s a song to help you do just that.”

The EP was released through local music streaming services as the final part of Mamamoo’s “Four Season Four Color” project, which officially began in March last year. The group announced in early 2018 that it would be launching a project in which it would release four EPs in a year, each with a different color symbolizing a particular member.

It began with “Yellow Flower” in March, a color symbolizing Hwasa. Next came Moonbyul’s red and Solar’s Blue - finishing off with Wheein’s white. Releasing four EPs within a year definitely wasn’t easy, but it was a memorable experience nonetheless.

“A lot of things happened during the project, but it feels bittersweet now that it’s all over,” said Solar.

“We looked forward to starting this project at first. Then we got so tired in the middle, because we had to prepare our next song as soon as we finished what we had before. It was so hard, but now that it’s over, it feels so bittersweet. I feel a sense of relief, but at the same time feel a bit sad. Because as hard as it was, it was also the chance for us to meet with fans and give them something new more often.”

Wheein agreed. “It was a new try for us, too. The past year has been hard, and there were times when we just passed out. But I feel like it gave us the opportunity to grow music-wise and learn a lot [together] as a group. And it will definitely be remembered as meaningful time.”

The title of “gogobebe” is deeper and more enigmatic than it might appear. The song’s true significance is alluded to inside the music video, which adds a finishing touch to the four-part project and a secret message to the fans. The four members enter a house numbered 99 toward the end of the video, and they later turn the numbers upside down to make a 66. The numbers can be used to write the title based on its resemblance to the letters - 9 as g, and 6 as b.

“There’s a part within my rap where it says, ‘nine six six nineteen, nine six gogobebe,’” said Moonbyul. “[The numbers] six nineteen are actually the date of our debut. I put it there because I wanted to tell the fans that we’re together from the beginning to the end.”

Having made its debut in 2014, Mamamoo is known for being one of the most well-balanced groups in K-pop, in which all the members of the group are equally famous, talented and popular. While members Solar and Wheein are known for their soulful voices, Moonbyul and Hwasa have been recognized for their rapping and singing talents.

Hwasa has been especially successful since last year. Each of the restaurants she visited while shooting the MBC reality show “I Live Alone” had visitors queuing for hours to get a taste of what Hwasa liked, while the products she used were sold out from stores across the country. Known also for her unique sense of fashion, she said she has to dress well to feel good.

“I have to wear the things I like to feel good on stage, and that’s why I try to have a say in everything that I wear,” said Hwasa. “I don’t consider myself a particularly good dresser. I just try to look for the things that will suit me well. Rather than fitting myself into the clothes, I try to think whether something is going to fit me.”

And will this song be a fit for Mamamoo? The group hopes to see it high on the music charts, but there’s something more important.

“We always hope that the songs will perform well on the charts, with this song, we really just want you to enjoy the song together with us. We hope it will heal you when you’re worn down. We will be satisfied if you just know how we feel,” said Moonbyul.