Cha Yu-ram is back, sort of

Cha Yu-ram is back, sort of 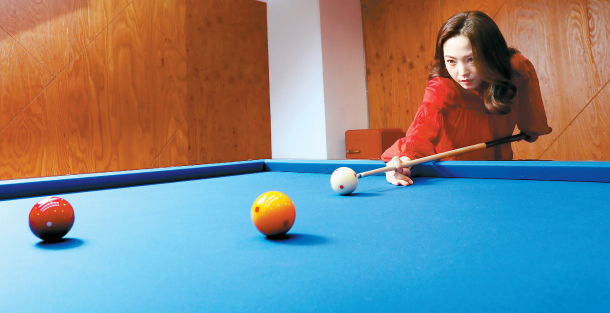 Cha Yu-ram, who will switch from pool to three-cushion billiards this year, trains at a billiard hall in Goyang, Gyeonggi. [WOO SANG-JO]

After a four-year hiatus, Cha Yu-ram has announced her return to billiards. This time around, the former world champion won’t be playing pool, however, opting instead to make her three-cushion debut.

Three-cushion billiards is a form of professional billiards where a point is scored for each successful carom, strike or rebound. A carom is when the cue ball successfully strikes two object balls. The player that scores the first 40 points wins. To be counted as a point, the cue ball has to contact three or more cushions before making contact with two balls.

“Three-cushion billiards is unusually popular in Korea. I changed my game to communicate with my fans,” said Cha.

Cha had been a dominant pool player in Asia, winning a gold medal in the women’s nine-ball singles at the 2009 Asian Indoor Games and two at the 2013 Asian Indoor and Martial Arts Games. Although she dominated the pool table, switching to three-cushion billiards wasn’t an easy move. In fact, she said she even came to regret that she knew pool so well.

“I wish that I didn’t know how to play pool,” said Cha. “Pool and three-cushion billiards are that different.”

Her aggressive playing style gave her an edge in pool, but three-cushion billiards requires a different approach.

“I was an offensive player in pool, but in three-cushion billiards, that can be a big minus. That is why I am changing my style,” said Cha. “Win or lose, I want to show my fans my own playing style. Even if it takes a little longer, I want to show fans a standard play with depth that has strong fundamentals.”

Cha Yu-ram and her daughter pose for a photo in Goyang, Gyeonggi, on Feb. 28. [WOO SANG-JO]

Cha started her sports career as an elementary school tennis player in 1995, but switched to billiards in 2000 at her father’s suggestion.

Cha’s first public outing was in September 2006, when she played a friendly game against the world-famous billiards star Jeanette Lee.

She quickly grabbed the attention of fans for not just her playing skills, but also her looks. That year, she also joined the national team for the 2006 Doha Asian Games.

She also competed at the 2010 Guangzhou Asian Games.

But it wasn’t all medals and awards ceremonies. The sport also comes at a price.

“I played pool since I was in sixth grade,” Cha said. “In 2013, I was getting injections in my shoulder to keep playing in the Asian Indoor and Martial Arts Games. Your body almost touches the table when you take shots in pool. This is a big burden to your body, and as my shoulder injury worsened, I constantly suffered from scoliosis.”

As her injuries worsened, Cha began to consider leaving the sport. Then, in June 2015, Cha married writer Lee Ji-sung and retired from professional billiards.

“I wanted to marry the one I love and live together sharing pillow talk,” Cha said. “That’s why I never picked up a cue in three years.”

After retiring from pool, Cha spent three years on her family, raising her kids and performing community service.

“My husband and I have the same values,” Cha said. “The reasons behind him wanting to self-improve were to have the power to help others in need, not for money and pride. I really liked how he actually built schools for children in need in Cambodia and the Philippines.”

However, it wasn’t all happily ever after. As Cha had spent the majority of her life playing pool, where she was in complete control of the game, raising children proved to be quite stressful.

“Unlike pool, where I am in charge, child rearing was strenuous because I couldn’t control anything,” Cha said. “I gained about 20 kilograms [44 pounds] after childbirth.”

She also said that at one point, focusing on her children made her feel like she was losing herself.

“I thought the thing that I did best was playing pool,” Cha said. “I wanted to hear my children say that they want to live a cool life like I did.”

Cha plans on making a comeback later this year and is currently practicing four to five hours daily, four days a week. She is currently training with Lee Jang-su, the former general manager of the national billiard team, who also introduced her to pool.