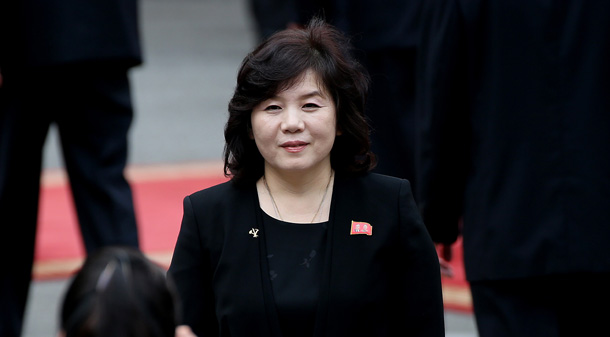 Calling the United States “gangster-like” for its refusal to compromise, North Korean Vice Foreign Minister Choe Son-hui on Friday said Pyongyang may suspend further negotiations with Washington on its denuclearization.

Speaking to foreign journalists and diplomats at a conference in Pyongyang, Choe accused the United States of having “no sincere intent” at the Hanoi summit in Vietnam last month to broker a deal on its denuclearization in return for sanctions relief.

“We have no intention to yield to the U.S. demands [at the Hanoi summit] in any form, nor are we willing to engage in negotiations of this kind,” Choe said, according to Russia's Tass news agency.

U.S. Secretary of State Mike Pompeo and White House national security adviser John Bolton were to blame for creating “the atmosphere of hostility and mistrust,” she said, which “obstructed the constructive effort for negotiations between the supreme leaders of North Korea and the United States.

"What is clear is that the United States has thrown away a golden opportunity this time," she added.

While the deputy foreign minister added that relations between the two leaders remained “mysteriously wonderful” in spite of the summit's collapse, her words are raising concerns that Pyongyang may revert to the “new path” threatened by leader Kim Jong-un in a New Year's address.

That “new path” was vague in Kim's speech, but Choe on Friday said outright that Kim could rethink the country's moratorium on nuclear and missile tests. Satellite footage suggesting the North was preparing for a new missile launch made headlines earlier this month, and Choe's statements could serve as a warning of renewed provocations from the regime.

Pyongyang’s heightened rhetoric, which was dialed down since it began engaging in dialogue with the United States last year, could also suggest a sense of urgency in the regime, which recently had to tap into its state food reserves to supply its markets, according to multiple sources.

“Under the orders of North Korean leader Kim Jong-un, the regime has been opening government Warehouse No. 5 and is supplying grain stored within to its markets,” one source familiar with developments in the North said. “This testifies to how bad the food situation in the North has become.”

Warehouse No. 5 is one of the regime's main emergency food reserves, the source said. It stockpiles rice in the event of emergencies like natural disasters and is managed by North Korea's ruling Workers' Party.

The rarely-opened warehouse “looks like it will also run out of food very soon,” the source continued, “leading many to speculate Warehouse No. 2 may be opened.”

According to the source, Warehouse No. 2 is managed directly by the military and stores grain to be used in the event of a wartime contingency. Officials who have pilfered food from it have been executed, the source said, and even in the devastating famine in the 1990s, it remained tightly closed.

“Kim Jong-un opened the warehouse once after his rise to power, in order to bolster his popularity, and once or twice more thereafter when the food crisis worsened,” the source said.

North Korea faces an increasingly dire food crisis as a result of a series of natural disasters like flash floods and heat waves last year, according to a UN Food and Agricultural Organization report last month.

According to a memo it submitted to the UN calling on international organizations for food aid, North Korea cut its daily rations to 300 grams (10.5 ounces) per person from 550 grams.

But market prices for staple crops like rice have remained relatively stable in North Korea since a new round of UN Security Council sanctions came as a result of its nuclear program in 2016. The price of rice has even fallen from around 6,000 North Korean won ($6.70) per kilogram in late 2017 to around 5,000 won last year.

According to one of the South's leading economic think tanks, the Korea Development Institute, the North appears to be stabilizing prices by importing basic necessities like rice through smuggling networks. The recent decision to open its state-owned grain warehouses indicates the sanctions are taking a toll on the market, a researcher at another government institute in South Korea said.