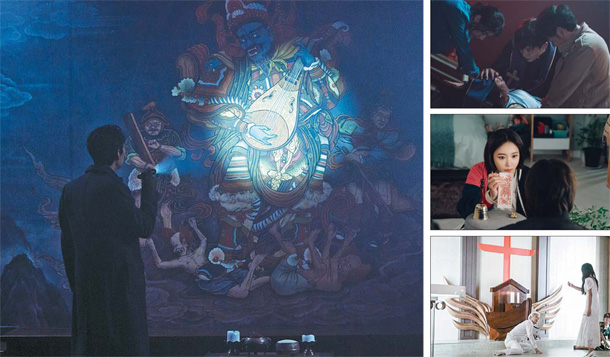 From left clockwise: Opportunistic Pastor Park comes across a Buddhist cult in film “Svaha: The Sixth Finger”; OCN’s recently-wrapped hit series “Son: The Guest” incorporates shamanism and exorcism; A detective and a psychic fight evil spirits in OCN’s new drama “Possessed”; A charismatic cult leader throws a town into chaos in OCN’s 2017 series “Save Me,” set to launch its second season from May. [JOONGANG ILBO, OCN]

There are still seven months to go until Halloween, yet movies and television shows about blood-thirsty zombies and murderous cult leaders have been taking over Korean screens.

In January, the first-ever Korean Netflix original drama series, “Kingdom,” made its debut. It was praised by audiences across the globe for its innovative idea of taking a very Western concept - a zombie apocalypse - and setting it against the backdrop of the Joseon Dynasty (1392-1910). Like “Kingdom,” local shows and movies dealing with the occult are increasingly taking on a Korean flavor, and winning over audiences in the process. They’re straying away from the Hollywood formula that made “The Exorcist” (1973) and “Omen” (1976) huge hits, and instead introducing elements like Buddhism, martial arts and psychics to appeal to local tastes.

“Svaha: The Sixth Finger,” directed by Jang Jae-hyun, the country’s leading director of occult films, has been a box office hit since its release on Feb. 20, selling 2.37 million tickets.

Unlike his debut full-length film “The Priests,” a successful exorcist movie about two Catholic priests trying to free a girl from an evil spirit, “Svaha” centers around Buddhism, a religion very familiar to local audiences, yet unexplored in Korean media.

In “Svaha,” the opportunistic Pastor Park (Lee Jung-jae) investigates religious cults for money. One dangerous case leads him to track down a Buddhist cult called Deer Park, which is suspected of being involved in a series of deaths.

It’s interesting - and refreshing - how Buddhist symbols play out in the thriller. The image of the colorful yet menacing Four Heavenly Kings succeeds in sending shivers down the spine. Halfway through the movie, the audience has a “eureka” moment when they realize that snakes are not necessarily evil, as in the Christian tradition, but represent guardians in Buddhism.

“While evil clearly exists in Christianity, that’s not the case in Buddhism,” Jang said. “If one lives, the other lives, and if one dies, the other dies - that’s the key principle of dependent origination.”

Kang Yu-jung, a film critic and professor of Korean literature at Kangnam University, sees the dual presence of two of Korea’s biggest religions as a positive step forward.

“The fact that a movie presents a pastor and Buddhist monk working together is very Korean,” said Kang. “Although there have been Korean movies dealing with shamanism in the past, it was hard to categorize them as occult due to weak symbolism. But by bringing in concepts from Buddhist scriptures, ‘Svaha’ is promising to extend the range of what we consider as occult.”

As in the film industry, the occult genre is catching on fast in TV as well.

OCN, Korea’s go-to channel for shows on dark magic and wild cults, has been behind supernatural TV shows like “Vampire Prosecutor” (2011-12) and “Cheo Yong” (2014-15), about a ghost-seeing detective, since it began producing original series in 2010.

More recently, it won over fans with “Son: The Guest,” a series in which a psychic taxi driver, a Catholic priest skilled in exorcism and a detective join forces to defeat a menacing spirit. Contrary to the popular belief that men are the main audience for shows about the supernatural, women in their 30s make up the largest demographic of “Son: The Guest” viewers. The producers of the drama are currently in talks to turn the successful show into a movie.

Following the success of “Son: The Guest,” the channel is also hoping that incorporating more familiar and traditionally Korean elements, such as mediums, will make shows more attractive. Earlier this month, it released “Possessed,” a romantic comedy-thriller series featuring Song Sae-byeok and Go Joon-hee as a detective and a psychic who chase away evil spirits. Starting in May, the channel is set to begin airing the second season of “Save Me,” which takes place in a small town thrown into chaos by a charismatic cult leader.

OCN director Hwang Hye-jeong thinks the popularity of shows like “Son: The Guest” is proof that the occult genre has finally become “mainstream” in Korea.

“If horror and thriller were genres that only a small minority enjoyed before, they’ve now become mainstream and secured a wide range of fans,” said Hwang.

Several movies dealing with the occult are also hitting the big screen this year.

“The Divine Fury,” featuring a mixed martial arts athlete (Park Seo-joon) who fights evil alongside a demon-fighting priest (Ahn Sung-ki), is set for release this summer. The movie has already been sold to 18 countries.

Later in the year, the horror film “Closet,” which stars Ha Jung-woo as a father who works with an exorcist (Kim Nam-gil) while looking for his lost daughter, will be released. Its star-studded cast already makes it one of the most anticipated local films of the year.

Film critic Kim Bong-seok hopes the upcoming films can help thriller and horror movies finally get the spotlight they deserve.

“Koreans have a tendency to consider B movies [low budget commercial movies] taboo, and that has made the domestic market for thriller, horror and mystery movies very small,” Kim said. “Occult-themed content has been excessively repressed in fear of promoting superstitious beliefs“

But the domestic market for content dealing with the paranormal has potential, Kim believes, given the success of Japanese horror films like “The Ring” and “The Grudge” in Korea.

“As much as there is a new market today led by Netflix and new cable channels, I hope that we can see releases of diverse films and go beyond lingering on the success of ‘The Priest.’”