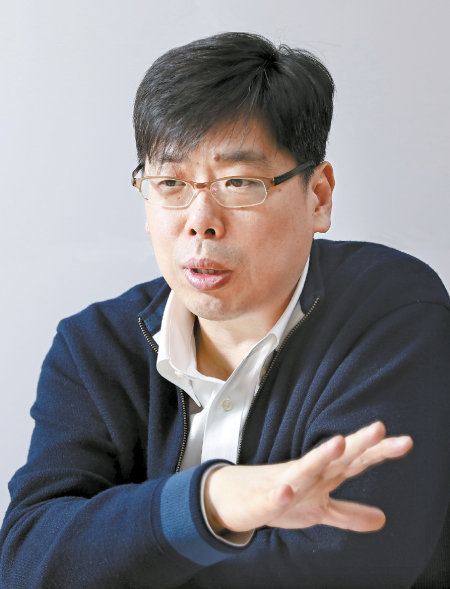 Jang Hyun-ki, head of the Digital R&D Center at Shinhan Bank, envisions the first page of a mobile banking app as being something like Google for banking. Users will simply talk to artificial intelligence (AI)-backed chatbot orora and tell it what they need done.

He believes that the advanced version of the chatbot will take center stage in Shinhan’s digitalization process as the bot will not only be able to send money but will also be able to provide financial consulting services.

The bank is also keen to deploy blockchain and the Internet of Things (IoT) to facilitate processes related to loans and derivative transactions.

The Korea JoongAng Daily sat down with Jang to discuss Shinhan’s digitalization efforts and the future direction. For a time, Jang worked at IBM Korea developing computing solutions for mobile applications and big data. Before Shinhan, he worked at SK Holdings to spearhead the development of the group’s Aibril AI.

The Digital R&D Center is a testing ground for different technologies for Shinhan. It has a total of six labs organized by key technologies, such as AI, blockchain and big data.

Q. What distinguishes Shinhan’s digital strategy from that of its competitors?

A. Put simply, Shinhan’s digital strategy is practical. We base our digital initiatives on a set of platforms. In this way, different services can be added to the platforms. And we build the platforms on our own, just like tech companies, so that the company can later keep on upgrading the functions. When this software platformization is well-organized, a range of services can be added quickly and more organically. Shinhan adopted the system in September 2017, creating different labs under our digital lab. Alongside platform-building, the digital lab should decide the entire direction of each platform. If there is no governance, applications and services could become fragmented and cumbersome.

There is a series of technologies that could define financial innovation, including AI, big data, blockchain and IoT. Is there any specific technology that will drive Shinhan’s digital strategy?

The main focus is our AI chatbot orora. The final vision will turn Shinhan’s mobile banking app into a Google-like page without any bar or menu. All customers need to do is to ask orora to deal with all the banking services. It is a transition from the era of the app interface to the bot.

Digitalization of banking could benefit consumers. But how can the banks benefit from the digital transformation?

The chatbot has the potential to boost sales of banks by providing a more customized list of recommendations for each client. The chatbot system can analyze the purchasing behavior, income level and savings and recommend financial products based on the data. The chatbot can also create additional revenue as it can sell products and process transactions when branches are closed.

Can you explain the effects of the new IoT platform designed to monitor the status of machinery assets?

Without the IoT platform, workers have to visit the site of the assets every three months. But now, we can save considerable time. The system also allows us to gain more concrete data about the financial state of the corporate clients. Let’s say the equipment operates 10 hours a day, which means the company is doing well. But if the average goes down to three hours, the company’s financial prospects are not good. The system can be extended to other functions - such as checking inventories or solar panels used for collateral. Workers who used to work at branches suggest different ideas to us, and most of the updated functions came from them.

Workforce is also important in undertaking digital transformation. Do you prefer to bring in experts from outside or train workers at the bank?

The work should be done in two dimensions. We need tech experts who can lead, for instance, the development of blockchain systems. Still, bankers also need to contribute their knowledge on new technologies. I think the two parties have their own strengths; the experts can share their expertise on a certain technologies and bank workers can better think of how the technology can better banking services or working procedures inside the bank. At the digital lab, one-third of the staff comes from outside, while the rest are from the bank.

Many banks focus on the digitalization of existing services, but fintech start-ups like Toss and Kakao Bank receive more positive reviews from customers. What do you make of the preference?

Their user interfaces are simpler because the range of their services is limited. Unlike these players, banks need to condense much more complex functions into a single app, which often makes the interface more complex. But I think there is something to be learned from internet-only banks and fintech firms. Their innovation can push the banks towards more radical digitalization. This is also a part of the reason why Shinhan decided to apply for a license for the opening of an internet-only bank in cooperation with Toss. If we have an internet bank under Shinhan Financial Group, its existence can lead Shinhan Bank to disruptive ideas. We could merge the two units, but nothing has been decided.

Regulatory hurdles are often cited as an obstacle to banking innovation. Is there any regulation that especially gets in the way of further digitalization?

The digital lab’s blockchain lab tried to upload a blockchain platform to the open, public cloud, but we faced a lot of paper work and more than 100 checklists. I think the process could be simplified to facilitate the technological improvement.

Banking leaps from past to the future