[Test drive] It’s a Korando, but not as we know it

[Test drive] It’s a Korando, but not as we know it 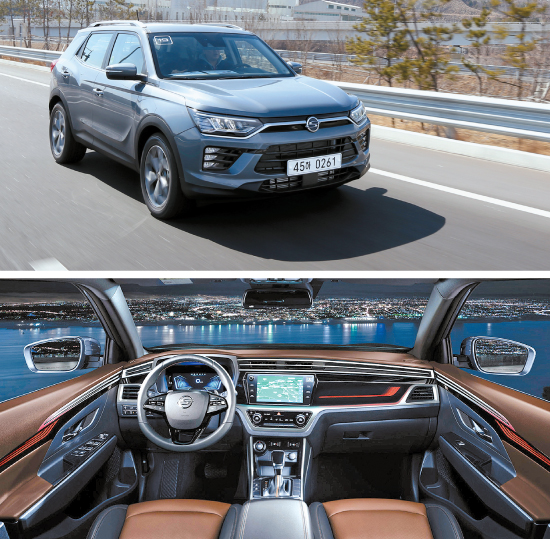 Top: The Korando SUV drives along a road in Songdo, Incheon. Above: The new version comes with a high-tech cockpit. [SSANGYONG MOTOR]

SONGDO, Incheon - SsangYong Motor’s first new version of the Korando SUV in eight years launched last month, sharing the same name but almost nothing else with its predecessor.

The new vehicle is significantly more high-tech than all preceding Korandos, packed with every digital feature SsangYong could find including a full digital cluster and partial auto-drive mode. It is also fancier in design, with a stable low and wide body and looks reminiscent of SsangYong’s popular compact SUV Tivoli.

The compromise comes with performance, but this isn’t necessarily a bad thing. The new Korando has stepped away from the wild driving performance the brand is known for, choosing to go quieter and smarter instead.

The Korea JoongAng Daily got behind the wheel of the latest Korando for a 46-kilometer (28.6-mile) drive between Eulwang-dong and Songdo in Incheon on Feb. 26. The car definitely looked cool both inside and outside, but on the road the sleek new vehicle came across as decidedly sluggish.

Acceleration was the issue. Even with the accelerator fully pressed to the floor, the speed only slowly crept up to 100 kilometers per hour (62 miles per hour), with the speedometer slowly creeping from 80 to 90 and eventually 100. Rather than immediately responding, the car also seemed to need a few seconds to think about it before responding to the command.

SsangYong seems to have considered the growing demand for SUVs to be used in cities, not only off-road, as families and first-car seekers are increasingly moving from sedans to affordable SUVs for the comfort of driving with a higher viewpoint in a more spacious vehicle. 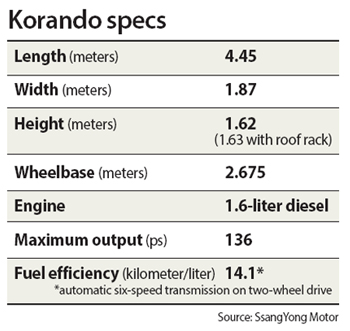 But considering the Korando only comes with a smaller engine, unlike competitors Hyundai Tucson and Kia Sportage that offer both 1.6-liter and 2.0-liter diesel trims, drivers looking for a powerful driving performance may be disappointed.

This reporter set an average speed of around 90 kilometers per hour and rode with her hands off the wheel and foot off the pedal on the highway. The ride was comfortable with no sign of the car moving out of the lane. About 10 seconds after letting go of the wheel, the car asked the reporter to take back control of the car.

The most attractive feature of the car, though, is its design.

The new Korando has adopted a low and wide exterior. The vehicle is 1.62 meters (5.31 feet) in height and 1.87 meters in width. It is frequently compared to rival Hyundai Tucson, which comes in at 1.65 meters in height and 1.85 meters in width. The Tucson is 3 centimeters (1.18 inches) longer in overall length, but SsangYong chose a flatter design that makes the car look sleeker and more powerful at the same time. A set of full LED head lamps and vertically aligned LED fog lamps add to the glamour of the Korando. SsangYong said it is its first full LED head lamp.

A more explicit design highlight is inside the car. A 10.25-inch full digital cluster replaces the busy dashboard. The screen, viewed through the empty space between the steering wheel spokes, can be changed to different modes to show general driving information, navigation or turn-by-turn guides. That and an upgraded 9-inch screen embedded in the dashboard just below the air vents are enough to make the cockpit look futuristic.

The addition of a head-up display would have been helpful, as it was often difficult to look at the navigation through the steering wheel.

To make the driving experience more fun, the Korando also comes with a mood lighting feature that offers 34 different colors. The lamp, when visible, is pretty neat, but in daylight, it wasn’t visible at all. The downside of the mood lamp was that it made the wide space in front of the passenger seat, just above the glove compartment, look vacant during daylight when the light is unusable.

One practical feature inside the vehicle is the inclusion of a 220 voltage inverter, allowing passengers to charge laptops inside the car.

Whether the new Korando will be enough to bring up SsangYong’s earnings into the surplus the company is hoping for is yet to be seen. The vehicle carries a price tag of between 22.16 million won ($20,090) and 28.13 million won.