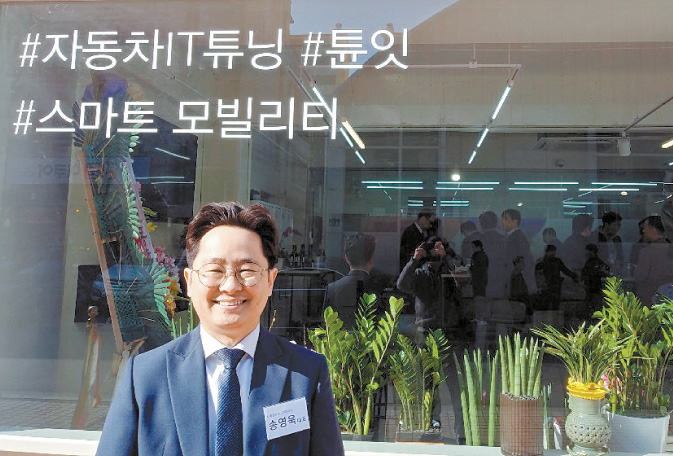 “Beep beep,” and the door of a white Kia Morning opened when Tune!T CEO Song Young-wook tapped a button in a smartphone application installed in his phone. The car, which was approximately five meters (16,4 feet) away from him, was ready for him to drive.

But he didn’t jump in for a ride. He instead tapped on the smartphone screen again to lock the car doors and sign himself out as a driver. Then, one of his employees pulled out his own smartphone and opened the same application.

Again, with just a tap on the screen, the vehicle opened its doors. The employee stepped in and drove the vehicle away.

“This is our company’s “smart key” technology,” Song said at opening ceremony held at Tune!T’s office in Seongnam, Gyeonggi. With this feature, multiple drivers can register as users for a single car and drive it freely with no restrictions.

The company specializes in Internet of Things (IoT) technology, which allows physical objects that might not otherwise be considered digital to be connected to the internet.

The Seongnam-based start-up plans to work closely with car-sharing companies in Korea by supplying them vehicles equipped with its technology. The company will officially start service in May.

“Smart tuning” feature on app that can adjust the seat position. [Tune!T]

“We don’t plan on delving into the car-sharing market ourselves,” Song said. “But we are looking to provide our technology as an add-on feature for vehicles car-sharing businesses.”

Despite its recent founding, the company is not new to the car-sharing market. The start-up partnered with J’Car in 2017, supplying a “smart tuning” system for 16 electric cars operated by the Gwangju-based start-up.

With the “smart tuning” system, vehicles can memorize and automatically chose the best seat position, temperature and mirror angles when a recognized smartphone user unlocks and enters the vehicle.

“Some of the items we introduced today are still in the process of development,” the company CEO said at the opening ceremony. “But we will officially announce some of them soon.”

The IoT-specialized company began as a Hyundai Motor’s in-house start-up in 2014 through a program named H-Startup.

Since 2000, Hyundai has allowed its employees to be involved in start-up endeavors and encouraged them to apply for company sponsorship in launching innovative products and services.

“Today’s cars are like old 2G cell phones,” Song said. “Smartphones today are extremely personalized for each user, and we thought we could apply the same concept to cars and make them ‘smart’ for drivers.”

The start-up will continue to work with the automaker as it will supply the parts needed to enable Hyundai’s vehicles for the “smart key” and “smart tuning” features. Hyundai will end up owning about 15 to 25 percent of Tune!T, Song said.

Tune!T hopes to equip Hyundai’s mid-price sedan models, like Avante, in the near future. It will likely be sold as an optional feature. Song expects the add-on package, which could be available as early as the middle of this year, to be priced between 200,000 won ($176) to 1 million won.