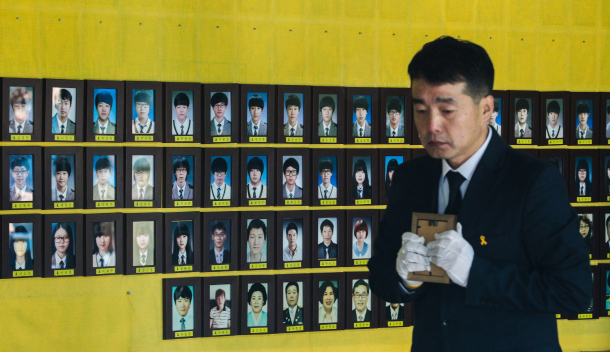 Portraits of victims of the Sewol ferry sinking, which killed 304 people in April 2014, are carried out of the incense altar at Gwanghwamun Square on Sunday. The altar, which has been set up at the square since July 2014, was closed down on Sunday and the portraits moved to Seoul City Hall, where it will stay temporarily until victims’ relatives decide where to place them permanently. [NEWS1]

The incense altar and portraits of 304 victims of the sinking of the Sewol ferry were moved from Gwanghwamun Square to the Seoul City Hall on Sunday with the agreement of the victims’ families.

“The relatives of victims have told the city government of Seoul that they are willing to close down the 14 tents they have set up at the square since July 2014,” the Seoul Metropolitan Government said in its statement. “After holding the ceremony of moving the portraits on Sunday, the tents will be removed Monday.”

The portraits were moved to the basement floor of Seoul City Hall on Sunday, where they will stay temporarily until the victims’ families decide where to place them more permanently. Around 100 relatives of the victims took part in a ceremony at the square on Sunday to move the portraits.

At Gwanghwamun Square, a temporary exhibition occupying about half the area where the tents stood will be set up. The exhibition, opening on April 12, will be dedicated to preventing disasters in Korea by providing information about them for educational purposes, the city government said. The exhibition will stand until the end of the year, after which the city government will discuss with the victims’ families whether to keep it at the square.

“The Sewol tents set up at Gwanghwamun Square were the beginning of and the center of the candlelight vigil at the square,” Park Rae-gun, head of the Seoul-based human rights foundation Saram, told the press on Sunday. “We are not stopping our movement to find out the truth, what really happened.”

The sinking of the Sewol ferry on April 16, 2014, was one of the largest disasters in recent Korean history.

It killed 304 people, of who 250 were students from Danwon High School in Ansan, Gyeonggi, who were traveling by ferry to Jeju Island on a field trip. From the moment the ferry set off for Jeju Island from Incheon, it was overloaded, which prevented the ferry from regaining balance after losing it for unexplained reasons.

When the ferry began to tilt to its port side at 8:48 a.m. on April 16, 2014, in waters off Jindo Island, passengers were told to remain put without further information from the crew. The captain of the ferry, Lee Jun-seok, was one of the first to escape the sinking ferry. He was sentenced to life in prison for involuntary manslaughter in 2015.

The ferry completely capsized at 10:30 a.m., according to authorities.

While this was happening, the media initially put out incorrect reports that all passengers had been rescued.

A total of 476 people had been on the ferry when it set sail. Of them, 172 people were rescued, including 23 members of the 29-person crew.

The botched rescue operation was severely criticized by the public, and when Park Geun-hye, who was president at the time, became embroiled in a corruption and power abuse scandal in October 2016, thousands of people began to rally in the Gwanghwamun Square, demanding she be removed from office over the Sewol tragedy and for allowing a shadowy inner circle to run her government.

Park was impeached and removed from office in March 2017. A fact-finding committee of her administration that operated from January 2015 to July 2016 did not produce tangible results on why the ferry capsized.

The sunken ferry was lifted out of the seabed and brought to land in April 2017. A one-year fact-finding investigation of the salvaged ferry that concluded in August 2018 did not pinpoint the cause of the sinking.