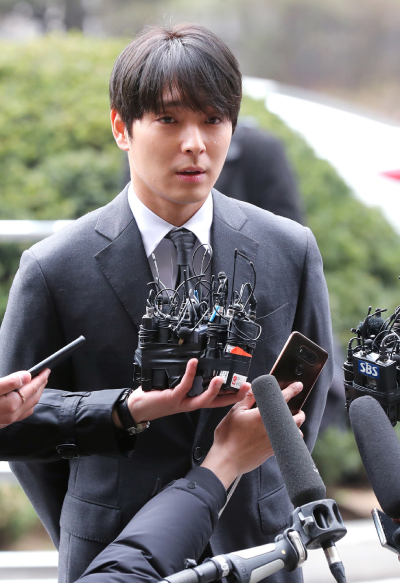 Police booked a serving police lieutenant as a suspect and are questioning an elite senior officer as a key witness in the mushrooming sex, drugs, celebrities and police protection scandal surrounding the Burning Sun nightclub.

Following the questioning of an elite police officer on Friday, the Seoul Metropolitan Police Agency said Sunday that it booked a lieutenant at the Gangnam Police Precinct as a suspect for criminal negligence related to illegal activities at the club in Gangnam District, southern Seoul, which was partly owned by K-pop megastar Seungri.

The club was located in the precinct where the lieutenant, only identified by his surname Kim, worked. This is the first time that a current police officer has been identified as a suspect in the scandal.

Kim was accused of criminal negligence in his handling of a complaint against Burning Sun in July last year. A complaint was filed that an underage guest entered the club and drank alcohol, but Kim closed the case, saying there was not enough evidence. Kim also allegedly advised the prosecution that there was no case to pursue.

It appears that the police are speeding up their investigation, as the Seoul Central District Prosecutors’ Office was assigned to investigate a separate but related case concerning several illicit activities discussed in KakaoTalk chat rooms by Seungri, his business partner and other celebrities. The suspected crimes include sexual assault, taking and sharing sex videos without the consent of women in them, prostitution, using drugs, bribing police and tax evasion.

“The scandal seems to be going on for a while, and it is uncomfortable that the police keep being mentioned,” a police official told the JoongAng Ilbo. “We want to quickly and sternly investigate the urgent issues.”

One of the urgent issues concerning the police is the suspicion that an elite member of the police, who once served at the Moon Jae-in Blue House, was involved in the crimes. The senior superintendent of the National Police Agency, only identified by his surname Yun, was suspected of having maintained a close relationship with Seungri, whose real name is Lee Seung-hyun, and his business partner, Yu In-seok.

Yun served as the community safety section head at the Gangnam Police Precinct in 2015, and was responsible for generally keeping order in the district. He was then assigned to work at the Central Police Academy starting January 2016. He was promoted to the senior superintendent rank later that year, and assigned to serve as the women and juvenile section chief of the Gangwon Provincial Police Agency in December 2016. In July 2017, he was assigned to work at the office of the senior presidential secretary for civil affairs. Since August last year, he had been working in the personnel affairs department at the National Police Agency.

On Saturday, Yun was relieved from his duty at the National Police Agency. He still maintains his rank as a senior superintendent.

Last week, Yu told the police that his police contact was Yun, dismissing speculation that a police commissioner general had his back. In raunchy Kakao chats involving Seungri, other celebrities and Burning Sun managers that took place in 2015 and 2016, a series of illicit activities, including a possible money-for-police protection case, were casually discussed.

Yu and Seungri co-own Yuri Holdings, which operate fancy clubs, bars and restaurants, including Burning Sun. The police summoned Yun as a witness and questioned him from 2 p.m. until 11:30 p.m. on Friday.

According to the police, Yun admitted that he had met with Seungri and Yu. Yun told the police that he had played golf with them and that they had lunch together.

“I feel sorry to have caused trouble to the police organization,” Yun was quoted as saying by a police source. “But it is not a crime to befriend an entrepreneur and a celebrity.”

The police said Yun denied giving favors to Seungri and Yu. He also told the police that he stopped having any meaningful contact with them since he was assigned to the Blue House.

As Yun left the Seoul Metropolitan Police Agency after the questioning, reporters asked him whether he was ordered by the upper chain of command to assume responsibility for the entire scandal. “Let’s not speculate,” Yun said.

The police said it will also investigate if Yun had any relationship with Lieutenant Kim.

The nightclub shut down last month after an avalanche of corruption allegations connected to drugs and prostitution arose.

Seungri was questioned last week as a suspect on charges of offering women for sex to potential investors, and his business partner, Yu, was questioned as a witness over the same allegation and suspected police bribery.

The police said they will investigate whether Kim had been intentionally negligent on the case and whether he had received any bribes or entertainment from Burning Sun’s operators. Kim reportedly denied all charges against him.

A former cop, identified by his surname Kang, was already arrested last week for having used his police network to dismiss the same case. He was also suspected of acting as a middleman between the club and police.

The police are investigating whether Kang delivered bribes to police officers at Gangnam Police Precinct based on testimony by Lee Moon-ho, a co-owner of the club, that he had offered 20 million won ($17,635) to Kang. Kang, however, denied that he had received any money or sought illicit favors from his former police colleagues.

A musician accused of sharing illicit sex videos through Kakao chats and using suspected police tie to keep a drunken driving incident quiet was also questioned by the police on Saturday.

Choi Jong-hoon, the former leader and guitarist of rock band FT Island, was a participant of the controversial Kakao group chats, which involved eight people, including Seungri, Yu and other celebrities. After the questioning, Choi told reporters that he did not take non-consensual sex videos. When asked about his alleged bribery of the police, he said, “I told the police everything.”

Choi also denied that he had any connection with Senior Superintendent Yun. Yu was suspected of having used his police connection to cover up Choi’s drunk driving case to avoid media coverage in 2016.