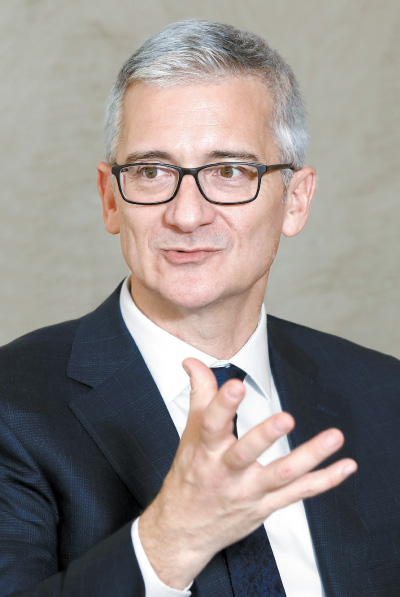 Seeing eye-to-eye on the cause of fine dust is the first step to forming an East Asian partnership to tackle the issue, according to Jacob Werksman, the principal adviser to the head of the European Commission’s climate policy body.

“It needs a shared understanding of what the problem is,” said Werksman during his visit to Korea for the launch of the European Union-Korea Climate Action Project on March 11.

“Countries need to work together to solve problems, but you cannot allow the collaboration to enable either country, organization or government to avoid the responsibility,” he said. “There is a need to understand where fine dust is coming from and what activities are responsible on the either side of the border.”

The EU delegation in Korea recently launched a three-year, 2.4 million euro [$2.7 million] project to coordinate climate change policies among non-state actors in the European Union and Korea. As the South Korean government announced a plan to cut greenhouse gas emissions by 37 percent below their usual level by 2030, and the EU by at least 40 percent by 2030, the new project will focus on helping nongovernmental entities play their roles in implementing these goals.

“I am delighted to launch the EU-Korea Climate Action Project,” said EU Ambassador to Korea Michael Reiterer at the reception for the project’s launch at the Westin Chosun Hotel in central Seoul on March 11. “The need for action could not be more urgent. In Seoul, it is said that parents consider emigrating so their children can escape the increasingly frequent high levels of fine dust. In Sweden and Australia, families flee wildfires. In other regions, fragile states see stress on natural resources contribute to conflict and mass migration.”

Although Korea has seen rising levels of fine dust for several years, this year and 2018 have been the worst. The daily average level of PM2.5 particles in Seoul hit a record on March 5, hitting 135 micrograms, the highest since 2015, when data was first recorded. This is more than five times the recommended daily exposure by the World Health Organization.

Many Koreans believe the spiking levels have to do with increased emissions from factories in China. Korea’s Ministry of Environment recently released a study that said foreign pollutants and stagnant air were the major causes for severe pollution from 2015 to 2017.

Beijing’s authorities have denied the allegation. China’s Foreign Ministry’s spokesman Lu Kang raised doubts last week that the fine dust came from China, saying that there’s no proof and that the cloud of dust over Seoul could have been caused by various factors. Since then, hundreds of Koreans have filed petitions with the Blue House to speak directly with the Chinese government on fine dust.

Werksman, who advises the European Commission regarding international partnerships on reducing greenhouse gas emissions and taking other actions to combat climate change effects, sat down for an interview with the Korea JoongAng Daily and the JoongAng Ilbo on March 11 to discuss multilateral environmental projects and how Korea and the EU can collaborate.

Q. One precedent example of a multilateral approach to combating air pollution may be the Gothenburg Protocol, accepted by the European Commission in 2017. How is the agreement being implemented across member countries?

A. This is part of the long-run transboundary air pollution convention treaties. They cover the European area and the United States and Canada in different settings. They have dealt effectively with transboundary air pollution in terms of acid rain and they have turned to particulates. It is a relatively new protocol and they are setting national emission limits that are allocated across different countries. Again, as with the fine dust issue in the Korean Peninsula and China, it requires an understanding of science and movement of particulates so that you have an understanding of where the sources are and what their impacts are.

Part of [the protocol] has to do with local air quality but also with climate change effects when these particles land in the arctic. When particulates fall on snow, they enhance the earth’s capacity to absorb light and therefore more heat. So increasingly there is a concern of black carbonates and their impact on the Arctic.

So fine dust and climate change effects are often interlinked?

The same sources of fine particulates are also significant sources of carbon dioxide, with the obvious common criminal being coal. So if you regulate carbon dioxide, it can improve the air quality. It’s something that has driven a lot of ambition in China for example, and we are hoping it will have the same effect in other countries where the middle class is beginning to take an interest in climate change because of the health effects it’s having through the related emissions of fine particulates.

South Korea enacted a special law on curbing fine dust on Feb. 15, which involves banning cars on the road on extremely dusty days, including old diesel-fueled cars. But some people have opposed the policy, claiming they cannot afford clean energy cars. This problem is not limited to Korea, as we have seen in the Yellow Vest protests in France. How do you propose countries implement environmentally friendly policies that are also socially inclusive?

One of the challenges in any society is giving a shared sense of responsibility across the entirety of society. As with any choices, there can be costs that can be up front and some benefits come later. I think part of the role of the government is to persuade people that the up-front costs are worth the longer-term benefits. But what’s unique to climate change and to air pollution is that they are collective action problems. So you have to persuade everyone to contribute. There are both progressive and regressive effects of climate policies - so some may have a particular impact on poor people and adjustment and help need to be provided. In the EU, we have been trying to ensure that job creation that is resulting from progressive climate policies reach the same communities that might be being displaced by those policies.

And you can see governments putting incentives in many societies, for example, in making hybrids and electric-powered vehicles cheaper and more affordable. I’m assuming those kinds of policies can also be available to the Korean government. And if you’re looking at an urban environment, that’s building the infrastructure for car sharing and electric car sharing. That’s something that we are seeing in all Europe, that people of all incomes are finding it much cheaper to not own a car but to be able to have access to a car -you don’t have to pay for insurance, parking spot, you often don’t have to pay for fuel. But it needs the infrastructure available in order to make that happen, like charging stations and parking spaces in the streets.

South Korean government is planning to reduce greenhouse gas emissions by 37 percent by 2030. Of this, it had intended to reduce some 11 percent of it by offsetting their carbon footprint abroad, but the government reduced the proportion to around 2 percent this year. How do you assess the overall 37 percent target and the change regarding buying carbon offsets abroad?

My understanding is that when our analysts look at the Korean target, they think there is a lot more that Korea can do. We were pleased when the new administration came in and began to rethink these targets, and one of the ways in which they are rethinking is by shifting more of the effort domestically than internationally. That has been part of the European experience as well. In our first commitment in the Kyoto Protocol, we enabled companies to reduce emissions by buying offsets overseas. It took a lot of the pressure off the companies to act more domestically and we fell behind in driving towards a low carbon economy as a result of that. So it makes sense to act first at home.

How economically feasible is the decision for a country to invest in renewable energy?

We think it is definitely feasible. Our long-term strategy is to imagine us essentially deriving nearly all of our electricity from renewable sources. There is an implied target to get to the renewable energy mix up to something like 80 percent by 2050. And our current targets set us on a pathway towards that. By 2020, our target deadline is 20 percent and it is likely we will exceed that. By 2030, the goal is to have at least 32 percent in the renewable energy mix. It has been our experience in the EU that once these targets are set, the industry responds and you get innovations that often drive down costs and allow governments to exceed targets.