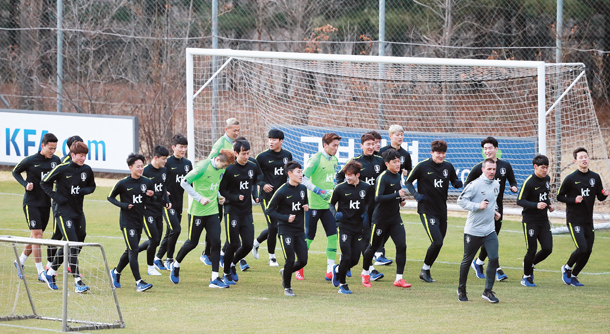 Korea men’s football head coach Paulo Bento said Monday he will look past players’ birth certificates and only focus on their abilities on the field when putting together his lineups going forward.

Bento opened camp at the National Football Center (NFC) in Paju, north of Seoul, ahead of Korea’s friendly matches against Bolivia on Friday and Colombia on March 26. The 27-man roster includes a pair of teenagers in midfield, 18-year-old Lee Kang-in and 19-year-old Kim Jung-min, plus 22-year-old international rookie Paik Seung-ho.

These players are expected to be the building blocks for the future, but Bento said the future could be now if they play their way into the lineup.

“The players’ ability is more important than their age,” Bento said at a press conference, when asked if he’d give these youngsters an opportunity to play this time. “As long as they’re capable, I won’t care about their age.”

The arrival of these young faces comes after international retirements of Ki Sung-yueng and Koo Ja-cheol, two former captains who last played for Korea at the Asian Football Confederation (AFC) Asian Cup in January.

“With the national team, you have to pick great players for every position, and you also have to think about the team’s future,” Bento said. “I have to try to figure out just when to throw our talented young players into the fire.”

Bento said he met with Lee during his scouting trip to Europe in February. Without disclosing exactly what was said between them, Bento said the teenager “seemed quite determined to make an impact with the national team.”

“I have a clear idea of what his strengths are,” Bento said. “He’s a skilled player. I’ll make a decision on when to play him in these friendly matches after watching him train here.”

“We must address the fact that we haven’t been scoring goals despite creating a lot of opportunities,” said Bento, whose team netted just six goals in five matches at the Asian Cup. “We have to finish better on offense. But overall, the players have a good understanding of our style of play.”

The upcoming matches are Korea’s first contests since the end of the Asian Cup.

“Though we didn’t live up to our fans’ expectations at the Asian Cup, the quality of our play and the players’ execution haven’t been all that bad,” the coach said. “We’ll test new players and see how they respond to different situations.”