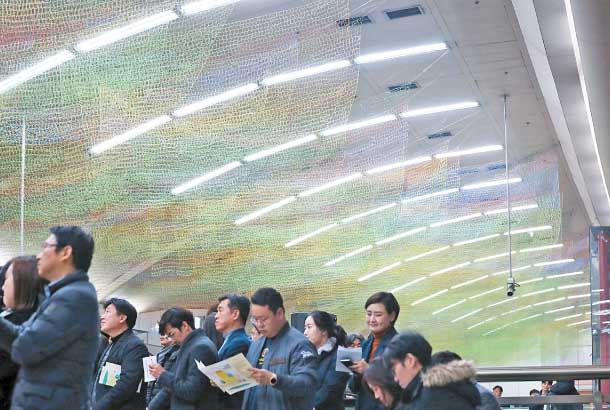 Noksapyeong Station, located just outside the U.S. Army base in Yongsan District, central Seoul, was once one of the city government’s most ambitious projects.

The station is 35 meters (115 feet) deep and 6,000 square meters (64,583 square feet). When it opened in 2000, it was ready to serve as a state-of-the-art subway transfer hub in anticipation of the planned relocation of Seoul City Hall to Yongsan. The relocation plans fell apart, however, and Noksapyeong was left as just a regular subway station on the outskirts of Itaewon, serving only around 15,000 passengers a day.

The “Noksapyeong Art Project,” organized by the city government in collaboration with Seoul Metro as part of the ongoing “Seoul is Museum” campaign, hopes to give the forgotten station new meaning as an “underground art garden.”

Last Thursday, Noksapyeong’s new look was revealed. The station has been decorated by five Korean artists and two architects from Japan whose works center on the theme of “Meadow of Lush Grass,” the meaning of Noksapyeong’s Chinese characters.

Japanese architects Yuri Naruse and Jun Inokuma’s “Dance of Light” is a thin, misty veil that drapes down the hollow tunnel at the center of the station. The veil is intended to act as a canvas that creates different shapes and reflects the sunlight as it comes through the glass domed ceiling.

The other artworks are located on the bottom two basement floors of the station. Kim Ah-yeon’s “Forest Gallery” is made of tree-like installations that recreate the forests of Mount Namsan, just a few minutes away from the station. Cho So-hee’s “Noksapyeong where…” features 139 overlapping colorful, aluminum mesh weaves hanging from the ceiling, simulating a green aurora.

Chung Jin-soo, who has directed music videos for pop stars like indie band Hyukoh, contributed his project “Flow,” a video montage of scenes from busy subway stations in New York and Seoul offset by footage of serene nature. Jeong Hee-woo’s “Times of the Wall” is made up of copies of the U.S. Army garrison’s walls surrounding Noksapyeong rubbed onto hanji, traditional Korean paper made from mulberry trees.

Kim Won-jin collaged and layered pencil crayon drawings that represent the Earth’s strata in her “The Depth of Distance-A Chronicle of the Moment” pieces, which are reprinted on the subway platform’s digital advertising screens. New green spots in the station, like the “Garden of Moment” and “Garden of Time,” also offer places for passersby to rest and are set to host various events.

Around 3,000 locals have already participated in art and nature-themed events in the station over the past six months. The U.S. Army garrison is also set to be reborn as a public park, and Noksapyeong will be the closest station to the park once it opens.