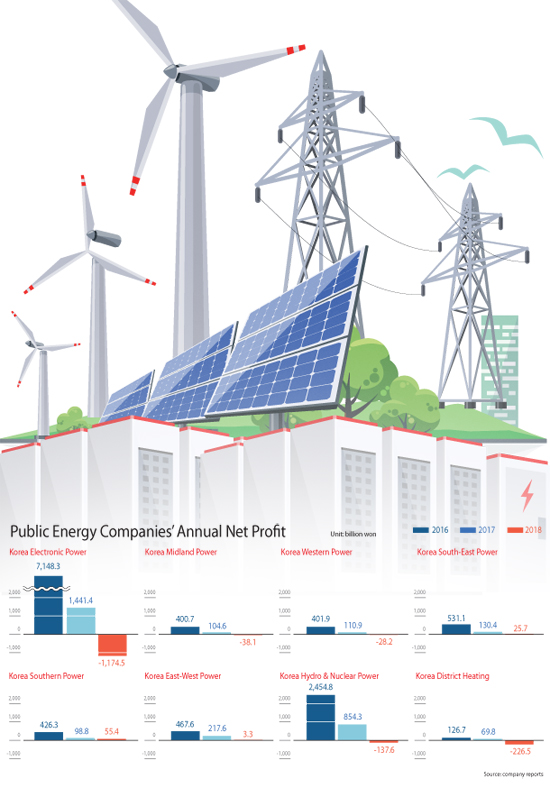 Profits dropped at all eight state-owned power companies in 2018.

While the companies linked the poor performance to the energy market and various technical factors, some experts put the blame squarely on the government’s eco-friendly energy initiatives.

The power company explained it had to spend more on sales and make other expenditures as operations at six new nuclear power plants were put on hold and Unit 1 of the Wolsong Nuclear Power Plant, Korea’s oldest operating reactor, was closed early. The energy producer supplies electricity generated from hydropower and nuclear power plants.

Public energy companies insist that the Moon administration’s nuclear-free initiative is not responsible for their declining profit levels. The current administration has long pushed to limit the role of nuclear power, citing the potential danger of leaks and accidents.

The companies attributed their worsening profit levels to other issues, such as increasing international fuel prices and scheduled maintenance for nuclear power plants.

They believe the poor performances are a result of the government’s energy initiative as a whole, not just its push to go nuclear-free. The current administration has been working to increase the use of LNG and renewable energy, and reduce the use of nuclear power plants to supply electricity.

Experts point out that LNG and environment-friendly sources are more costly than nuclear power.

“The power companies had no option but to spend more in buying expensive energy instead of affordable nuclear power,” said Lee Duck-hwan, a chemistry professor at Sogang University.

“The loss was inevitable for them, as the operating costs for five power companies, including Korea Electric Power, increased and Korea Hydro & Nuclear Power was stopped from selling more energy.”

If the current situation continues, it would be inevitable for the government to increase the price of electricity, Lee added. Korea District Heating reported the biggest loss, of 2.27 billion won, since its founding in 1985. The company’s debt ratio broke 260 percent last year.

The government continues to promote using more LNG and a reduction of coal generation to fight pollution. The Ministry of Trade, Industry and Energy announced earlier this month it will close six aging coal power plants by 2022, three years earlier than originally planned. The ministry also vowed to expand the number of coal plants that will have their operations curtailed when the government issues a fine dust warning.

Power companies face an increasing financial burden from policy. Korea National Oil and Korea Resources are being forced to end their overseas resource development plans as the government considers the plans “deep-rooted irregularities” from the previous administration.

The companies are also expected to spend more on their human capital, as the government requires them to upgrade contract workers to full-time employees.

“The financial situation of the public energy companies is worsening as they accumulate more debt,” said Ock Dong-seok, a trade professor at Incheon University. “The government would be forced to offset the deficit with the national budget, which would not be a healthy option for them.”