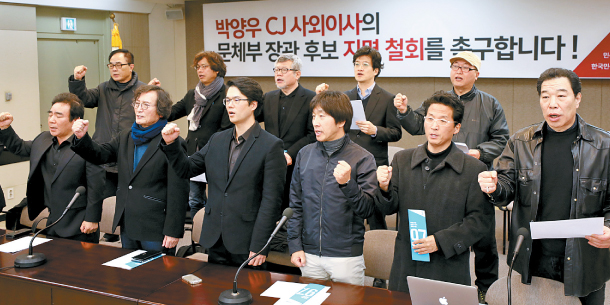 Members and representatives of the Korean Council of Cineastes for Cultural Diversity and Monopoly Regulation ask for Park Yang-woo’s withdrawal as the new culture minister at a press conference held Monday at the Korea Press Center, central Seoul. [NEWS1]


The Korean Council of Cineastes for Cultural Diversity and Monopoly Regulation, a civic group, held a press conference on Monday to urge the government to withdraw the nomination of Park Yang-woo as the new minister of culture, sports and tourism, citing his time spent as an outside director of major entertainment company CJ ENM. The group said it is afraid that Park, who “is corporate-friendly,” would not help a bill against film distribution monopolies pass the National Assembly.

The press conference at Seoul Press Center, central Seoul, was attended by representatives of the group, which includes members of the film industry, as well as the Korean Confederation of Trade Unions, the National Professors Association for Democratization and other trade groups.

“Park has used arguments that support the position of large companies, which never welcome a revision of the Motion Pictures Act, as the revision bans companies from combining movie distribution and theater businesses and from distributing excess screens to a single movie,” the group said in a statement.

For over 10 years, giant conglomerates including CJ Group, which owns both film distributor CJ ENM and multiplex theater chain CJ CGV, have been criticized for giving the majority of screens at their theaters to films distributed by their affiliates.

Park said he will not support the revision bill, which was proposed by current Culture Minister Do Jong-hwan in 2016 but is still pending in the National Assembly, according to the group.

After the conference, the group sent its statement to the Blue House and began a sit-in strike in front of the presidential office.