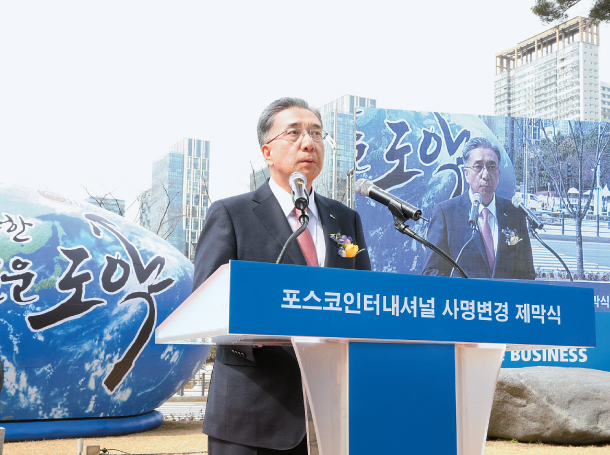 With the new name, the listed subsidiary of the steelmaker said it hopes to expand its presence in the global markets. The move was also made to bolster its identity as a member of the Posco family and end the association with Daewoo, a conglomerate which went under two decades ago after the Asian financial crisis in late 1990s.

The Posco unit added in a statement Monday that being under the steelmaker helped it expand businesses and post record earnings in both 2017 and 2018 despite a difficult environment.

The unit is 62.9 percent owned by the steelmaker.

The company was founded in 1967 as Daewoo Industry, later growing into the second-largest chaebol in the country by the 1990s. Rapid expansion of businesses and the economic crisis that began in 1997 pushed Daewoo into bankruptcy in 1999, and 12 subsidiaries under the group including Daewoo Corporation were restructured.

In 2000, the trading business unit spun-off from Daewoo Corporation as an independent company, Daewoo International. Posco acquired the company in 2010 and the trading company rebranded as Posco Daewoo in 2016.

With the trading arm reborn as Posco International, the focus will be on nurturing future cash-cow businesses, such as liquefied natural gas and food trading, in cooperation with the country’s largest steelmaker.

The company believes the terminal will help guarantee a stable domestic supply of grain, especially in the event of a worldwide food crisis, and help it make its name as a global grain trader.

Remnants of the failed conglomerate are now few. Among companies still carrying the Daewoo name are Daewoo Shipbuilding and Marine Engineering and Mirae Asset Daewoo.