Bolton tells Pyongyang that new tests are ‘not a good idea’

Bolton tells Pyongyang that new tests are ‘not a good idea’ 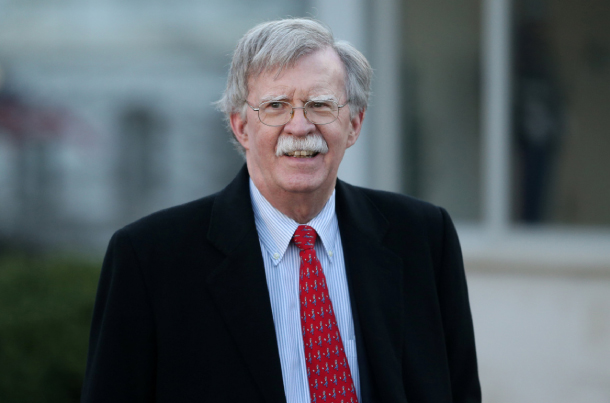 John Bolton, the U.S. national security adviser, warned that North Korea resuming its nuclear and missile testing will “not be a good idea” in a radio interview Sunday.

Responding to North Korean Vice Foreign Minister Choe Son-hui’s recent remarks critical of Washington, Bolton told the WNYM radio in New York, “They issued an unhelpful statement that they’re thinking of going back to nuclear and ballistic missile testing, which would not be a good idea on their part.”

Notably, Choe blamed Bolton and U.S. Secretary of State Mike Pompeo for creating an “atmosphere of hostility and mistrust” that “obstructed” the negotiation efforts by the two countries leaders.

“The North Koreans were unfortunately not willing to do what they needed to do,” said Bolton, a hard-liner on North Korea, on the second North-U.S. summit, which concluded abruptly without an agreement on Feb. 28

Bolton took part in the Hanoi talks where the two sides failed to reach compromise as Pyongyang demanded some sanctions relief while Washington demanded measures beyond the dismantling of the North’s Yongbyon nuclear complex.

Earlier this month, Bolton said that U.S. President Donald Trump had offered a “big deal” calling for the elimination of North Korea’s weapons of mass destruction (WMD) program, which includes give up its nuclear, chemical and biological weapons and its ballistic missiles.

Trump “wants North Korea to be free of nuclear weapons,” said Bolton, which also comes with the offer of “a very different kind of economic future.”

Bolton added that Trump “wants this threat resolved through negotiations” and has “made a number of proposals” to North Korean leader Kim Jong-un.

Trump himself has remained mum on Choe’s statement Friday. Likewise, North Korea has been careful not to upset Trump directly.

Following the Hanoi summit, Trump emphasized that Kim Jong-un pledged to continue the North’s moratorium on nuclear and missile testing.

He said that China has the same position as the United States “at least in theory” and that Washington may be “willing to consider” a role for Beijing in the negotiations if “some movement on North Korea’s part” is seen.

Mick Mulvaney, acting White House chief of staff, told Fox News Sunday, that the “resumption of the missile testing would be seen as sort of a violation of some sort of breach of trust.”

Mulvaney, who also took part in the Hanoi summit, said that “there was a general understanding that there was no reason for that to continue, as long as we were continuing to have conversations. And the conversations continue.”

“I can foresee the president and the chairman [Kim] sitting down at some point in the future,” said Mulvaney. “But if [North Korea] were to begin testing again, that would be seen as a truly disappointing turn of events.”

Mulvaney recognized it is “probably not reasonable” to think that the North Korean denuclearization will be solved in “one meeting or two meetings.”

Likewise, South Korean President Moon Jae-in and his advisers are now focusing on how to play a mediating role following the failed Hanoi summit last month.

Moon took his second day off on Monday from public activities after arriving home last Saturday from a weeklong Southeast Asian tour.

Blue House officials are weighing various options but refraining from direct contact with Pyongyang at this point as the regime appears to be occupied with its own internal strategizing.

A high-ranking Blue House official told reporters Sunday that it is unlikely that North Korea and the U.S. will “return to the days of conflict and confrontation seen before 2017,” pointing out that both sides have “moved forward too much to return to the past.”

Despite the Hanoi summit failing to produce a deal, he noted that both the United States and North Korea have “made clear that diplomacy and negotiations will continue.”

This official added that “there is no difference in opinions between South Korea and the United States on the roadmap toward producing the final goal of denuclearization.”

The official said there may be a need to “reconsider” Washington’s all or nothing approach, pointing out that “it is realistically difficult to achieve complete denuclearization” all at once.

Seoul has to encourage efforts to make a “good enough deal” or a “small deal” to build up mutual trust and reach their ultimate goal of denuclearization, he added.