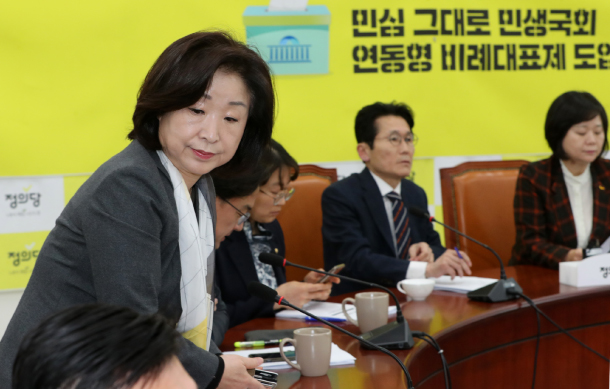 The ruling party and three opposition parties’ complex formula to decide proportional representatives for next year’s general election caused a furor Monday after a senior lawmaker said that the public doesn’t need to understand the system.

Floor leaders of the ruling Democratic Party (DP) and opposition Bareunmirae Party, Party for Democracy and Peace and Justice Party reached a tentative agreement to revise the current election system Sunday night after hours of negotiations. The main opposition Liberty Korea Party (LKP) did not participate in the negotiations.

The four parties agreed to maintain the total number of seats in the National Assembly at 300. They agreed to reduce the electoral seats from 253 to 225, while increasing proportional seats from 47 to 75. They also agreed to lower the voting age to 18.

Rep. Sim Sang-jeung, floor leader of the Justice Party, held a briefing Sunday night to explain the intended changes, but the complexity of a new equation to be used to allocate proportional seats to political parties quickly threw journalists off.

After a series of questions by puzzled reporters, Sim admitted to the problem. “The election system is extremely complicated if you look at the numbers,” Sim said. “Computers can take care of the formula, no matter how complex it is, but it is hard to understand now.”

After reporters repeatedly demanded a clear mathematical formula on allocating proportional representatives, Sim said, “You won’t understand the formula. It must be calibrated by a mathematician.”

“How can the people understand this, when reporters cannot understand it,” asked one reporter. “The people don’t need a formula,” said Sim in response. “For example, when you use a computer, you just need to know how to type with the keyboard. You don’t have to know how the components work inside the computer.”

The LKP condemned its rivals for creating a complicated system that no one can understand in a closed-door negotiation. “[Sim] said the people don’t need to know,” said Rep. Na Kyung-won, floor leader of the LKP. “Let’s think about why they are making this complex system.”

Na then said the key of the agreement was making the Justice Party an independent negotiating bloc by giving them more proportional representation. By doing so, the liberals want to weaken the power of the conservatives, she said.

A party with 20 or more lawmakers is called a negotiating bloc, which has the power to send representatives to negotiate legislative calendars and bills and receive a higher state subsidy. As of now, only the DP, LKP and Bareunmirae Party are negotiation blocs.

Sim said Monday that Na was just picking a fight. Although the complex change was agreed after seven hours of negotiations among the chief negotiators of the four parties, it remains to be seen whether they will be endorsed by lawmakers of each party. Some lawmakers of the Bareunmirae Party and Party for Democracy and Peace already expressed their opposition.

Some Bareunmirae lawmakers said they disagree with the plan that the election law revision will be voted on through a “fast-track” system along with the Moon Jae-in administration’s initiatives to create a new investigative body for public servants and redistribute investigative power between the prosecution and the police.

Party for Democracy and Peace lawmakers oppose the election reform plan because electoral seats in their strongholds of Gwangju and the Jeolla provinces will drop.