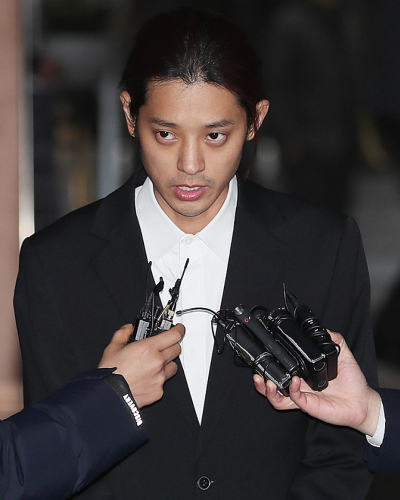 Police on Monday named one of their own senior officers as a suspect in a case involving police protection allegedly given to operators of the scandal-plagued Burning Sun nightclub.

Won Kyung-hwan, commissioner of the Seoul Metropolitan Police Agency, held a press conference Monday and briefed journalists on the progress made so far in its probe of the mushrooming sex, drugs and police protection scandal surrounding the nightclub co-owned by K-pop megastar Seungri.

A senior superintendent questioned last week as a witness is now a criminal suspect, Won said.

The officer, whose surname was identified as Yun, was charged with malfeasance in office and suspended from duties. He was accused of abusing his power last July to dismiss a complaint against the nightclub claiming an underage guest had drunk alcohol there.

“Including senior superintendent Yun, we relieved three police officers suspected of being involved in the case from their duties as of Sunday,” Won said. “As of today, they were all booked as suspects. Any member of the police linked to the scandal, no matter how high their ranks are, will be punished sternly.”

“Yun is accused of leaking confidential information he obtained in the line of duty,” said an official of the Seoul Metropolitan Police Agency. “Yun asked the Gangnam Police Station if a complaint was formally registered and if they were investigating. How the police handled the case afterward should be investigated further.”

According to police, Yun was introduced through another businessman to Yu In-seok, a business partner of Seungri, whose real name is Lee Seung-hyun. Seungri and Yu together operated Yuri Holdings, which invested in entertainment and bar businesses.

In earlier questioning, Yun admitted that he had befriended Yu and Seungri, but said there were no corrupt ties.

According to police sources, Yun played golf and dined with Yu in 2017 and last year. Yun, an elite member of the police, was assigned to work at the Moon Jae-in Blue House under the supervision of the senior presidential secretary for civil affairs for one year since July 2017.

“We need to check further, but we believe he may have golfed with Yu about 10 times,” a police source said. “Other celebrities joined them, and we need to investigate further. We are also investigating if Yun violated the anti-solicitation law.”

Yun is suspected of having pulled strings when the Burning Sun nightclub faced a police investigation last July due to a complaint about an underage guest. He was suspected of having asked his former colleagues at the Gangnam Police Station to look into the case. At the time, he had completed his rotation at the Blue House and was about to be assigned to a personnel affairs post at the National Police Agency.

Yun served as the community safety section head at the Gangnam Police Station in 2015, and was responsible for generally keeping order in the district. He was then assigned to the Central Police Academy in January 2016. He was promoted to the senior superintendent rank later that year and assigned to serve as the women and juvenile section chief of the Gangwon Provincial Police Agency in December 2016.

In July 2017, he was assigned to work at the office of the senior presidential secretary for civil affairs at the Blue House.

One lieutenant at Gangnam Station was booked as a suspect last week in the case. As of now, four incumbent police officers are being investigated in the scandal.

Yun is suspected of having shielded other illicit activities committed by Seungri, Yu and other celebrities. Raunchy Kakao group chats involving eight people including Seungri, Yu and another singer, Jung Joon-young, contained multiple mentions of Yun.

Yun was also suspected of using his power to dismiss a case against another club operated by Seungri. After the youngest member of Big Bang opened Monkey Museum in Cheongdam-dong, Gangnam District, southern Seoul, in July 2016, a neighboring venue notified the district authorities that the club’s interior decoration violated zoning laws. Yun reportedly used his power to dismiss the complaint.

At the time, the complaint said Monkey Museum, although it was registered as a restaurant, installed special lighting structures and operated as a club. In the Kakao chats, a participant said Yu had texted his police contact about the issue and the issue was “handled.”

Later that year, the district’s health office slapped a one-month business suspension on Monkey Museum for violating its operation permit as a restaurant. But the club volunteered to pay fines instead and continued operations. The club is currently shut down.

The police also said Monday they sought a warrant to detain Lee Moon-ho, a chief operator of the Burning Sun, on charges of illegal drug trading. Accusations of sexual assault and drug use at the club have been probed by the police since the scandal broke out earlier this month.

“So far, we booked a total of 40 suspects on charges of violating the Narcotics Control Act,” said a police official. “Three have been detained, and we are also planning to detain Lee.”

Among them was a Chinese woman who sold drugs to VIP customers at Burning Sun. She has denied the charges.

“Of the 40 suspects, 10 are dealers,” the police official said. “And four of them are linked to Burning Sun.”

In a related but separate case, the police said it summoned singer Jung again on Sunday and asked him about accusations that he shot and distributed sex videos without the consent of the women in them. He was already questioned about those charges for 21 hours on Thursday.

The police said they requested the prosecution on Monday to apply for a court warrant to detain Jung. If the prosecution agrees, a court will hold a warrant hearing within two to three days.