Women in 20s faring better with jobs than men

Women in 20s faring better with jobs than men 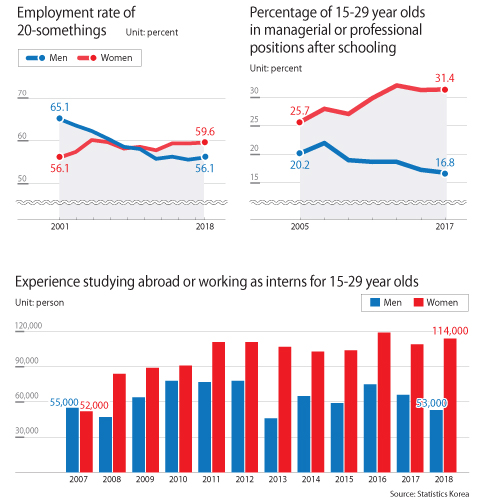 Korean men in their twenties lag behind women in employment and work-related activities, according to data from Korea’s statistics agency, reflecting the difficulty both genders face in finding jobs these days.

The employment rate for men in their twenties last year was at 56.1 percent compared to 59.6 percent for women.

The employment rate for women in that age group has been surpassing that of men since 2011. Even when considering that men go through roughly two years of military service usually in their early 20s, women have surpassed men in employment in the 25 to 29 year age group, when men usually enter the workforce, since 2017.

Meanwhile, from 2012, the share of women in their twenties have surpassed those of men in terms of taking part in economic activity, a statistic that tracks those who are either working or looking for a job.

In online forums frequented by men, internet slang terms such as the “loser zone” have surfaced, referring to the job searching period for young men. They consider themselves losers because they can’t pay for dates with a girlfriend because of difficulties in finding a job.

Discussing the frustration faced by young men, Kim Chang-in, author of “The Current History of the Youth,” explained that men in their twenties face conflict in meeting the societal demands of a patriarchal society.

Statistics, however, do indicate that Korea battles discrimination against women in the workplace in later age groups. For people in their thirties, the employment rate for men reached 89.7 percent last year compared to 60.7 percent for women.

Men in their twenties still face a difficult situation in a depressed job market, more so than their female counterparts.

For managerial or professional positions as first jobs out of school, the employment rate for men stood at 21.3 percent, and for women at 26.5 percent in 2004. The difference widened significantly in 2017, with men at 16.8 percent and women at 31.4 percent.

As men face an increasingly difficult job market, politicians who ignore such realities have drawn criticism. The government and ruling party have recently faced declining approval rates from men in their twenties.

“In order to improve the job search conflict from spreading into a gender conflict, there needs to be an overall improvement to the economic environment so that the youth are able to find jobs of value,” said Jeong Dae-young, an economics professor at Pohang University of Science and Technology.