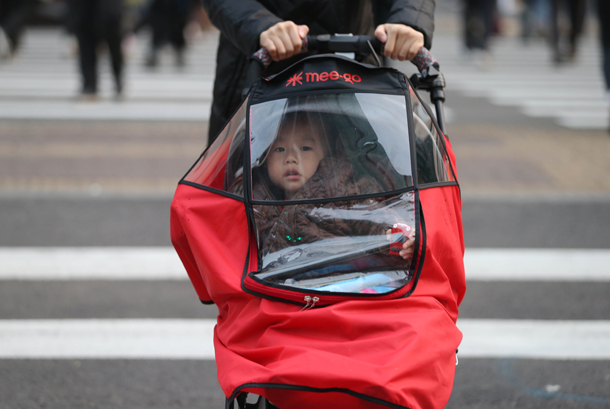 My husband has been dropping off and picking up our daughter from day care here in Tokyo. Drop off is at 9 a.m. and pick up is at 5 p.m. I was worried he might feel awkward as he doesn’t speak Japanese, but it seems there are many fathers who also take their children to day care. My husband said he feels a sense of kinship with other fathers and enjoys the commute with his daughter. It is a strange sight to see fathers waiting in front of the day care. Because of the fixed time my husband and I have to report to the office in the morning and the irregular time we get off work, my parents were in charge of dropping off and picking up our child when we lived in Korea.

In Tokyo, I frequently spot fathers pushing strollers on the weekend. It’s not uncommon to see a father with kids at family restaurants. “Iku-men” — a term referring to fathers in charge of childcare — is not a fad, but has become routine life. The main section of the bookstore I frequent features magazines for fathers, many of which contain articles about products such as “strollers for fathers” and “fashion for fathers,” and it seems like the iku-men are a growing market category.

The Japanese government’s cabinet ministry launched its iku-men project in 2010. As the workforce was facing a shortage and the birth rate needed a boost, bringing mothers back to work after childbirth was a primary goal. It was necessary to change the concept of childcare to include fathers as well as mothers.

The percentage of fathers who take childcare leave was 5.14 percent as of 2017 according to an average of private and government statistics, far lower than Korea’s 10.2 percent. The leave period is short; a full 83.1 percent take less than one month, and 56.9 percent of them take fewer than five days. It is more like a childbirth leave, not childcare leave. Yet Japan’s aggregated birth rate in 2017 was 1.43, higher than Korea’s 1.05.

“Iku-boss,” a concept introduced by the Japanese government in 2014, refers to a boss who offers a work environment that balances both work and childcare. They are prohibited to make threats like “men cannot succeed if they get involved in childcare.” A boss who does not schedule unnecessary meetings, appropriately allocates workload and shares the schedule is already halfway there.