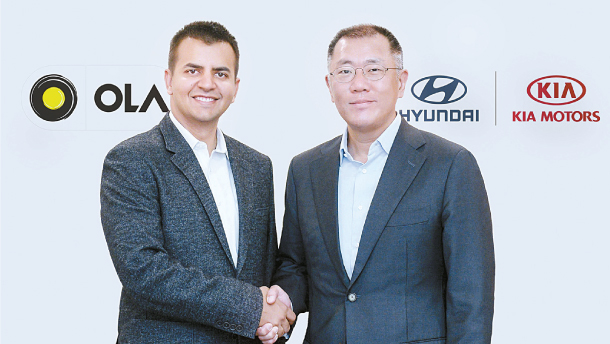 It is the group’s largest single investment in a company not already affiliated with it, the group said Tuesday. Hyundai Motor and Kia Motors jointly invested $275 million last year in Grab, Southeast Asia’s largest car-hailing company.

Hyundai Motor will invest $240 million while Kia Motors will invest $60 million into the Indian mobility company. With the investments, the two Korean automakers and Ola will jointly develop a fleet-management solution for the car-sharing business.

According to Hyundai, the fleet-management solution will include the offering of financial programs, such as leasing, installment and insurance plans, to Ola drivers so they can purchase or rent cars at affordable prices. It will also be used for managing the supply and demand of vehicles.

Hyundai and Kia plan to develop electric vehicles (EVs) designed for the Indian market in partnership with Ola. The EVs will be utilized for car-hailing. The Korean automakers said they will help establish EV infrastructure, like charging stations.

India has been aggressively pushing for more eco-friendly cars.

Hyundai and Kia already cooperate with Revv, another Indian car-sharing company, on car sharing, car rentals and car subscription programs. The automakers said its partnership with Ola will give them a chance to explore additional mobility business models in India.

Hyundai Motor is hoping to expand its presence in the Indian market. For Kia Motors, which entered the country relatively late, this will be a chance to more aggressively tackle the market in the second-most populous country in the world.

Ola, founded in 2011, is the largest mobility service company in India, with offerings in roughly 125 cities globally. It operates approximately 1.3 million vehicles. The auto group said Hyundai and Kia are the only automakers that invested in Ola so far.