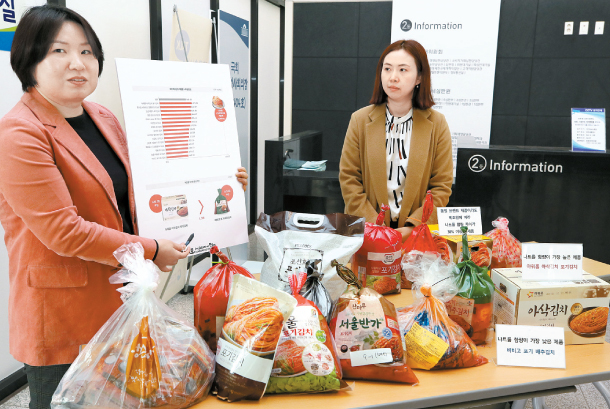 Take the health benefits of kimchi with a grain of salt - store-bought kimchi is loaded with sodium, and often much more than you think.

Local consumer group Consumers Korea said Tuesday that 100 grams (3.5 ounces) of packaged store-bought cabbage kimchi has an average of 569.58 milligrams (0.02 ounces) of sodium, or 28.5 percent of the daily nutritional recommendation of 2,000 milligrams, according to tests of 15 products.

Food manufacturer Ourhome’s kimchi had the highest amount, with 691.95 milligrams, 1.5 times more than that of CJ’s food brand Bibigo, which had the lowest at 467.33 milligrams per 100 grams of kimchi.

Consumers Korea’s findings are part of its efforts to provide nutritional information for consumers as the packaged side dish is exempt from mandatory nutritional value labels. Of the 15 products tested, only two had such information.

The group also reported that the salty staple could come with significantly more or less salt depending on its manufactured date.

The sodium content of the claimed superfood varied as much as 45.6 percent for Chosun Hotel’s kimchi, with one of its products containing 379.77 milligrams per 100 grams, while another contained 552.98 milligrams.

All 15 kimchi products met safety standards in tests for food poisoning bacteria and heavy metals. The group also said it did not detect preservatives or tar dyes.

The organization said it requested the Ministry of Food and Drug Safety enforce nutritional information labeling on kimchi products.

It recommended kimchi manufacturers concentrate on product quality given the various amount of sodium in the same products.

The latest kimchi report comes as the government pursues measures to foster the local kimchi industry into foreign markets.

The Ministry of Agriculture announced earlier this month that it would provide 18 percent of export distribution costs for local kimchi companies and provide 50 million won ($44,171) in marketing costs per company.