Probe of two scandals gets another extension

Probe of two scandals gets another extension 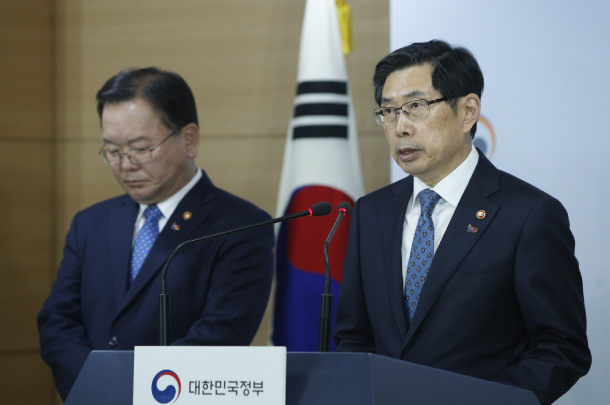 The Ministry of Justice said Tuesday that it has extended the life of a fact-finding team by two months to investigate suspected prosecutorial misconduct in two sex scandals involving top officials, media executives and a deceased actress.

Justice Minister Park Sang-ki and Minister of Interior and Safety Kim Boo-kyum jointly held a press conference Tuesday morning and presented their plans to follow through on President Moon Jae-in’s order to get to the bottom of the scandals. On Monday, Moon said police and prosecutors must consider their “fate” tied to investigations into three major sex scandals, one current and two from years past.

“Over the past 13 months, the fact-finding team of the Supreme Prosecutors’ Office looked into 15 suspected cases of abusive and unlawful investigations and prosecutorial misconduct in the past,” said Park, adding that the probe was extended already three times. “We decided to extend the investigation by another two months to wrap up some unresolved cases.”

The team will tackle two particular cases that took place during the previous conservative administrations. One is a 2013 sex scandal involving former Vice Justice Minister Kim Hak-eui, who served only six days during the Park Geun-hye administration.

He resigned amid allegations that he attended parties thrown by a contractor who hired women to have sex with high-profile figures in order to gain business favors. That scandal later evolved into a drug-and-rape case when a woman claimed that she was drugged and raped by Kim and the contractor, Yun Jung-cheon, and was videotaped against her will having sex with them.

Kim was accused of having received sex services from 2007 to 2012, but the prosecution dropped the case after two investigations since the case emerged in 2013. Yun was also not prosecuted.

Another scandal involves alleged prosecutorial misconduct involving a deceased actress. Jang Ja-yeon committed suicide on March 7, 2009, after leaving a letter in which she claimed to have been forced by her former manager to have sex with influential figures in the entertainment industry to land roles on television. While top media executives were allegedly named in the list, no charges were pressed against them.

“The two scandals involve members of the elite, prestigious class of our society,” Minister Park said. “Because there are suspicions that prosecutors and police were negligent, obstructed justice and were even involved in cover-ups, the people are enraged.”

Park said the prosecution will immediately begin official investigations if charges are discovered by the fact-finding team. The team is currently looking into allegations that dozens of politicians, businessmen, medical doctors and military generals were invited to sex parties at Yun’s villa in Wonju, Gangwon.

The team is reportedly analyzing a Defense Security Command intelligence report saying that former and current generals visited the villa.

At the press conference, Minister Kim Boo-kyum, who oversees the police, also promised a thorough investigation into a more recent sex, drugs and police protection scandal involving K-pop celebrities. The Seoul Metropolitan Police Agency and the Seoul Central District Prosecutors’ Office are looking into alleged sex crimes, sale and use of drugs and police protection at the Burning Sun nightclub, operated by Seungri, formerly the youngest member of Big Bang.

Kim said the police around the nation will start crackdowns on illicit activities at major nightclubs.

“We acknowledge the public outrage about the transparency of our investigation,” he said. “As the minister of interior and safety, I offer a serious apology to the people that the police, which is responsible for cracking down on crimes, has been accused of having a cozy relationship with [criminals].”

The Justice Ministry’s decision to extend the fact-finding mission stirred controversy. Although the team, launched in February 2018, has had its mandate extended three times, it decided Tuesday to wrap up its probe of the two earlier sex scandals without charges. That conclusion, however, was overturned a week later after President Moon issued the order.

“Not every statute of limitations has expired,” said Kim Yeong-hui, a lawyer who is participating in the prosecution’s fact-finding team. “If the aggravated rape charge is proven, we still have time.”

In the sex scandal involving the late Jang, statutes of limitation for most charges are expired. The prostitution charge has a 10-year statute, and the statute of limitations for coercion, which can be applied to the men who attended the parties where Jang was allegedly force to entertain, is seven years.

The only person who faced the prosecution in the Jang scandal is a former Chosun Ilbo reporter.

Last June, prosecutors indicted a 50-year-old journalist-turned politician on a charge of commissioning indecent acts by compulsion, just two months before the expiration of the 10-year statute of limitations. While he was prosecuted, no other suspected media figures, including other top Chosun Ilbo executives, were prosecuted.

In June 2008, Im and Jang reportedly exchanged calls and texts 35 times, and the phone Im used belonged to Lee. The prosecution’s fact-finding team said the police obtained the information in 2009 when it first investigated the Jang scandal, but did not investigate Im and Lee.

Moon said the truths of those cases must be made public, adding that the probes must concentrate on intentionally negligent investigations by the prosecution, police and the National Tax Service into those scandals and their practices of offering systemic protection, cover-ups and favors.

“The prosecution is not allowed to investigate cases for which statutes of limitations have expired,” said a prosecutor-turned lawyer. “The president is a lawyer, so he must have known this. Therefore, his order is going beyond giving guidelines for probes. It is against the criminal justice system.”

The conservative opposition Liberty Korea Party (LKP) said Moon’s order has political intentions. Hwang Kyo-ahn, the newly elected chairman of the LKP, served as the justice minister in the Park administration when Kim was named as his deputy. The ruling Democratic Party (DP) said it must be investigated if Hwang had anything to do with the prosecution’s decision to drop the case.

Hwang said Monday that he had nothing to do with the case, dismissing the notion that he used his influence to dismiss the case.

Rep. Na Kyung-won, floor leader of the LKP, told the Chosun Ilbo that the Blue House was targeting the head of the opposition party and a media company critical of the administration as political revenge. She said the probes are intended to reverse Moon’s plummeting approval ratings.