K.J. Choi to be assistant captain for Int’l Team

K.J. Choi to be assistant captain for Int’l Team

Korean PGA Tour veteran Choi Kyung-ju has been named an assistant captain for the International Team at the 2019 Presidents Cup. 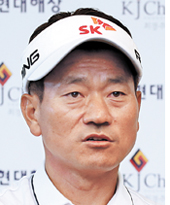 Choi, better known internationally as K.J. Choi, will be one of four assistants for captain Ernie Els, the PGA Tour announced Wednesday.

The Presidents Cup is a biennial men’s match play competition that pits the United States against a team of non-European international players. This year’s event will take place at Royal Melbourne Golf Club in Melbourne from Dec. 9-15.

Choi, an eight-time PGA Tour winner, previously served as vice captain to Nick Price when the Presidents Cup took place in his native Korea in 2015. He played at the Presidents Cup in 2003, 2007 and 2011, compiling a 6-8 record. Joining Choi as assistants will be Mike Weir of Canada, Trevor Immelman of South Africa and Geoff Ogilvy of Australia.

“I’m personally very happy and honored,” Choi said in a statement released by the PGA Tour. “You need amazing teamwork to win the Presidents Cup. It’s our role as captain’s assistants to bring together players of different nationalities and have them blend well together. It’s our role to have them open up to us and help relieve some of the pressure they might feel.”

“As the most successful Asian golfer on the PGA Tour, K.J. certainly commands a lot of respect amongst our players, and I believe he will fire up our guys at Royal Melbourne,” Els said. “K.J. has a calm demeanor, which will be a valuable asset in our team room and out on the golf course during the heat of battle. I’ll be counting on K.J. to impart his vast experience of being a three-time International Team member, as well as a captain’s assistant when we map out our strategies during the competition.”

The 12-man International Team will feature the top eight players based on the world ranking points accumulated from Aug. 27, 2018, to Aug. 25, 2019, plus four captain selections.

No Korean player is currently among the top eight, and Kim Si-woo, a two-time PGA Tour champion, is the top Korean at No. 11.