A look at the past, present and future of the DMZ: Exhibit features human life and nature around the zone between the two Koreas

A look at the past, present and future of the DMZ: Exhibit features human life and nature around the zone between the two Koreas

The spectacular photo installation, “Eulji Theater”( 2019), by Yeondoo Jung in the Central Hall of the Culture Station Seoul 284 is part of the “DMZ” exhibition that starts today in the art space in central Seoul. [GWANGJU BIENNALE FOUNDATION]

There is now a way to travel to the demilitarized zone (DMZ) between the two Koreas without ever leaving Seoul: the “DMZ” exhibition that starts today at Culture Station Seoul 284 in the former Seoul Station building.

The exhibition is one of the largest-ever art shows about the buffer zone between South and North Korea. Fifty artists present works about the past, present and future of the DMZ seen in various aspects, encompassing histories, politics, individual lives and natures from each of their perspectives. The artists include big names from contemporary Korean art, such as Lee Bul, Minouk Lim, Yeondoo Jung, Kyungah Ham and Ahn Kyuchul, and foreign art stars like Tobias Rehberger and Tomas Saraceno.

The exhibition also has a special section titled “The Life Environment of the DMZ,” which features botanical specimens from the areas near the zone where diverse species of wild flora and fauna are well preserved because of the lack of human activity.

The basis of the exhibition is the “Real DMZ Project” led by Sunjung Kim, president of the Gwangju Biennale Foundation since 2012, in which local and foreign artists are invited to do research on the zone, to create artworks based on it and exhibit them within the civilian control line, whose northern border is the DMZ. 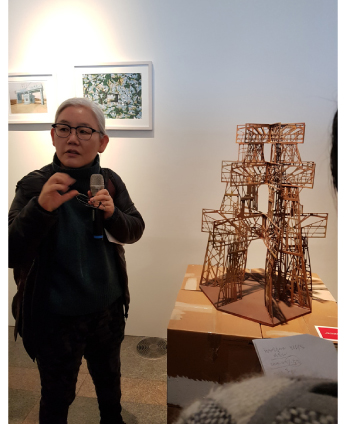 Artist Lee Bul, above, explains a model for a new installation work to be made with remains from demolished guard posts and to be unveiled at the 2019 Venice Biennale. [MOON SO-YOUNG]

“But this is not just a relocation of the artworks created as part of the Real DMZ Project,” Kim, who directed the curation of this exhibition, said in a press conference Wednesday. “Actually, many of the works now on view have been newly commissioned. Through the exhibit, viewers will be able to experience the spaces around the DMZ including villages within the civilian control line and guard posts, while also experiencing the zone and its future.”

The exhibition is composed of four sections in addition to the special section. The Central Hall is conceptualized as the DMZ’s “Present” under the title “DMZ under Transitions: Guard Posts and Observatories.” This section features works by artists that reflect the current situation and appearance of the Korean border.

Among them is the spectacular photo installation “Eulji Theater” (2019) by Yeondoo Jung. It is a mise-en-scene with combination of both fiction and documentation, as the people in the photo include actors amid the real tourists and some props, while the place is the actual Eulji Observatory on the DMZ’s eastern front. The artist made works about 13 observatories, and visited the DMZ more than 50 times.

“At such observatories, having become popular sites of ‘security tourism,’ the guides tell the visitors episodes about the DMZ, which sound unbelievable and sometimes mythical,” Jung said. “And the tourists look at North Korean people through the glass of the observatory in the same way they do at a zoo. [This is] ironic and comical. It makes the observatory a theater in my work.” 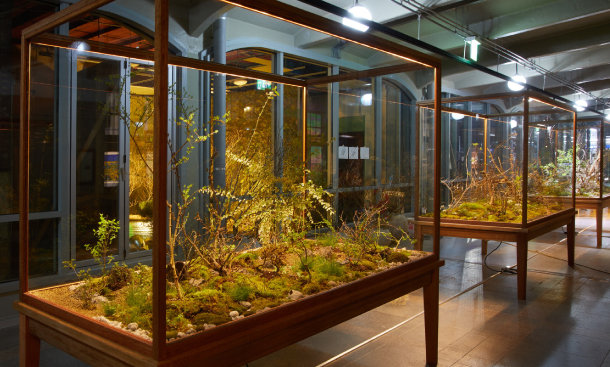 The terrariums in “The Life Environment of the DMZ” section at the “DMZ” exhibition. [GWANGJU BIENNALE FOUNDATION]

The “Propositions for the Future’s DMZ” section features architects’ models of structures they hope to build in the zone and artists’ works about their imagination of the zone’s future. Among the works on view is architect Seung H-Sang’s “Birds’ Monastery,” a structure for wild birds to inhabit.

Artist Lee Bul presents two drawings from the Real DMZ Project and a model for an ambitious installation work in the shape of a military light tower, which she will unveil at the 2019 Venice Biennale, which starts in May.

“It will be about 4 meters [13 feet] high [...] It is being made with used steel from the remains of demolished guard posts. [The two Koreas dismantled 20 front-line guard posts in December as a move toward peace],” the artist said.

The section “Life in the DMZ and Border Areas: Soldiers and Villagers” explores the lives of soldiers and villagers through the lenses of photographers including Heinkuhn Oh and Noh Suntag, while the section “DMZ History and Landscapes,” offers a look into the DMZ’s history by presenting paintings by Kim Jiwon, Min Joung-ki and others.