Tussle over weirs on rivers gets very political

Tussle over weirs on rivers gets very political 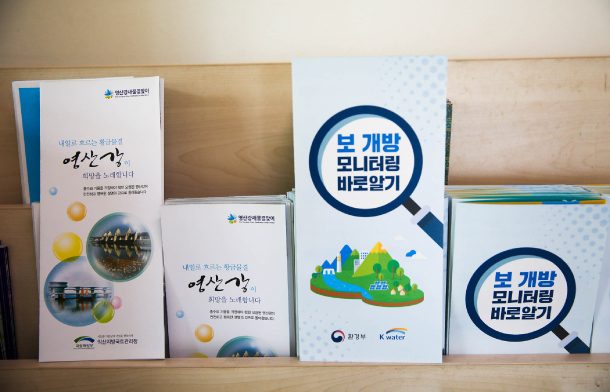 The Yeongsan River Culture Pavilion is located in Gwangju’s Nam District on the Yeongsan River. It offers some helpful literature describing the four-rivers restoration project, a major engineering and environmental undertaking of the Lee Myung-bak administration (2008-2013).

One brochure from the Land Ministry dating back to when Lee was in office claims that weirs built along the Yeongsan River helped improve the lives of the people living near the river. They not only reduced worries about flood and drought but also brought down the pollution level.

The brochure said, thanks to the four-rivers project, water quality improved 75 percent.

But a different brochure published recently by the Ministry of Environment claimed the opposite. Since the four-rivers restoration project was completed, algal bloom increased, it states. By opening up the weirs on the rivers - in other words, bypassing them - the water quality improved significantly and the ecosystem was restored, it says.

A special committee formed by the Environment Ministry under President Moon Jae-in consisting of 43 experts from four different fields, including economics and the environment, spent three months studying the impact of the four-rivers project. It reviewed five weirs on the Geum and Yeongsan rivers - Sejong, Gongju, Baekje, Seungchon and Juksan.

Last month, it announced its conclusions. It recommended dismantling the Sejong Weir along the Geum River in the Chungcheong region and the Juksan Weir on the Yeongsan River in South Jeolla.

It also proposed partially dismantling the Gongju Weir on the Geum River.

On March 13, there was a public discussion held over the future of the Juksan Weir at the Naju community center in South Jeolla, and some 200 people attended.

Some agreed with the committee’s proposal to dismantle the weir. But not all were convinced.

“How could the government’s evaluation of the same weirs be so contradictory over a period of less than 10 years?” asked Kim Jin-gu, a 59-year-old local riding his bicycle near the Seungchon Weir on the Yeongsan River. “Who can tell if the decision might be reversed if the government changes again?”

Lim Gyeong-ryeol, a 59-year-old who lives near the Juksan Weir, said the way the current government is handling the issue in the same rushed, headlong way as the Lee Myung-bak administration did 10 years ago.

People who oppose the dismantling of the weirs cite the economic benefits, including an influx of tourists thanks to the rise in the water levels since they were constructed.

This allowed Naju in South Jeolla to operate a cruise ship in Yeongsanpo, a small river port. Tourists have poured in and local shops have seen a mini boom.

People living near the Sejong and Gongju Weirs on the Geum River have had similar reactions.

“I can’t trust the government when it says it will be looking into the economics of the dismantling when it had already made up its mind in advance,” said Yoon Eung-jin, the 55-year-old head of Pyeongmok Village in Gongju, South Chungcheong.

According to the Environment Ministry, the government spent 180 billion won ($159.2 million) to build the Sejong, Gongju and Juksan Weirs.

Dismantling them will cost 89.8 billion won and the government will also have to spend 101.2 billion won to combat a shortage of drinking water when the levels of the rivers drop.

Some experts points out that the government is rushing too quickly.

“The Environment Ministry’s report is the only basis for the argument that the water quality has deteriorated,” said Seo Dong-il, an environmental engineering professor at Chungnam National University. “Arguing that the weirs have to be dismantled without analyzing other indices is the same as applying mercurochrome for a headache.”