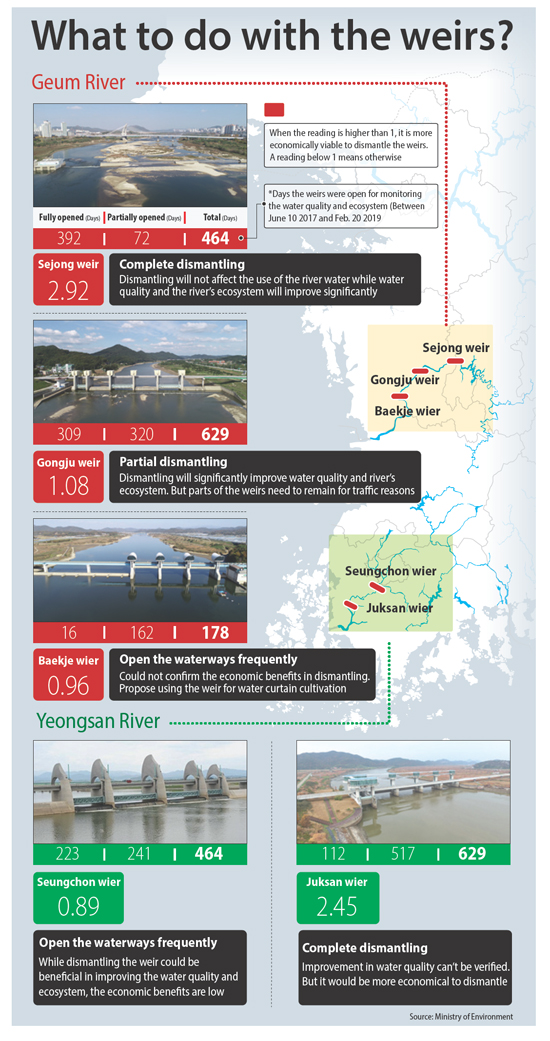 Experts and environmental groups argued that the weirs of the four-rivers restoration project just had to be opened and the water quality and ecosystems would return to normal.

That, according to a report last month from a special committee of 43 experts, didn’t happen.

Based on government monitoring between June 2017 and Feb. 20, 2019, the chlorophyll a (Chl-a) levels at the Seungchon weir on the Yeongsan River rose from 46 milligrams per cubic meters to 52 milligrams. A high concentration of chlorophyll results in algae bloom.

The chemical oxygen demand (COD), also another water-quality metric, increased from 8.5 parts per million to 10.7 parts per million. The fish assessment index (FAI) at the Seungchon weir fell from 28.8 to 28.2. This means that the ecosystem has worsened.

Readings from the Juksan weir, also on the Yeongsan River, also suggested a deterioration. The Chl-a level there was up from 59 milligram per cubic meters to 84, while the COD level rose from 9.1 parts per million to 9.3 parts per million.

An Environment Ministry official said the monitoring period was short and the level of pollution rose because sediment was washed down when the gates were opened.

“The water quality isn’t determined entirely by the existence of weir,” said Jun Kyung-soo, Sungkyunkwan University professor on civil and environmental engineering. “The period of research was too short, and there’s a need for a significant improvement in the quality and quantity [of the research].”

Some have pointed out that the special committee of experts didn’t have enough time, as it has only been formed for three months. The committee officially launched in November last year.

“It usually takes at least a year to evaluate water quality,” said Hwang Soon-jin, a Konkuk University professor specializing in water and environment science. “There’s a limit to a three-month investigation.”

The committee was formed under a tight schedule as the Moon Jae-in government in May 2017 said it would come up with proposed measures for the weirs of the four rivers by the end of 2018.

Even the economic evaluation of the rivers has been under fire.

The committee said it would make sense from an economic point of view to dismantle three weirs - Sejong, Gongju and Juksan.

The special committee said it would be more profitable to dismantle the weirs than maintain them as the water quality would improve.

Yet, the evaluation used data from before the weirs were constructed.

Some have argued the information that the committee used may be inaccurate, and that they should have used the data that were compiled since the weirs were installed. They added that in evaluating the economics of the weirs, the psychological benefits that come from the improved view around the river banks weren’t accounted for.

“When accounting the noneconomic value, keeping the weir could be more cost effective,” said Kim Jeong-in, a professor at Chung-Ang University.

It’s rare for a project to be mired in such controversy. Massive protests occurred when it first broke ground in 2008, and it has been subject to auditing by the Board of Audit and Inspection of Korea four times.

The four-rivers restoration project started off as a campaign promise by then candidate Lee Myung-bak. He promised a grand canal.

After Lee took office in 2008, he faced strong resistance from opposition parties and environmental groups.

In June 2018, President Lee announced the cancellation of his grand canal project. After six months, he came up with a new plan - the four-rivers restoration project. He said the new infrastructure would not only improve the environment of the four rivers - Han, Nakdong, Geum and Yeongsan River - but also create jobs.

Between 2009 and early 2013, the government spent 22 trillion won on the project. The Land Ministry covered the majority of the investment, 15.4 trillion won, while state-own Korea Water Resource (K-water) covered the remaining 8 trillion won.

The project included the construction of 16 weirs along the rivers, as well as the Yeongju Dam in North Gyeongsang.

The Lee government said that with the weirs and the dam it was able to secure 1.3 billion tons of water resources and achieve a degree of flood prevention. The Lee government also created 1,230 kilometers (764 miles) of bicycle roads and trails along the riverbanks.

Environmental groups have argued the restoration project actually harmed the environment by slowing the river current, resulting in algal bloom and preventing the migration of fish.

Some of the areas along the rivers suffered heavy algal bloom, so much so that the phrase “nokjo latte,” or “algal latte,” was coined given it resembled a green tea latte.

This was unprecedented: no project has even been investigated four times by the government.

The four-rivers restoration project faced a new challenge when the Moon government took office in May 2017.

President Moon while on the campaign trail promised that the weirs would be opened up fully and that some would be dismantled.

In June 2017, the government opened six weirs - Gangjeong-Goryeong, Hapcheon-Changnyeong, Changnyeong-Haman on the Nakdong River, Gongju on the Geum River and Juksan on the Yeongsan River.

On Nov. 13, the government opened up more weirs, including Sejong and Baekje on the Geum River, and Seungchon on the Yeongsan River.

Last month, the Nakdan and Sangju weirs on the Nakdong River were opened for the first time.

While the special committee that was formed in November has come up with a proposal on five weirs on the Geum and Yeongsan Rivers, it will be coming up with proposals on the remaining 11 weirs on the Han and Nakdong rivers by the end of this year.