Five years in the making, Heize drops an album: The singer hopes that ‘She’s Fine’ is only the beginning of her career

Five years in the making, Heize drops an album: The singer hopes that ‘She’s Fine’ is only the beginning of her career 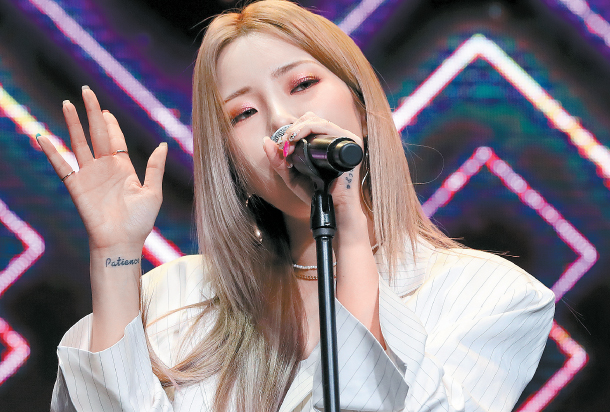 Singer Heize performs the title track off of her first full-length album “She’s Fine” on Tuesday at Yes24 Muvhall in western Seoul. This is the singer’s first album since her debut five years ago. [YONHAP]

In the five years since singer Heize entered the music world, she has been able to garner new fans with each song she released. Most would have guessed that most of her hit songs came from albums, but her latest release “She’s Fine” is, in fact, the singer’s first full-length album. It was released on Tuesday at 6 p.m. on local music streaming services.

“I’ve prepared for over six months for this song,” said Heize while meeting with local press on Tuesday at the Yes24 Muvhall in western Seoul. “Aside from the times I was meeting with my fans and performing in concerts, I spent all my time working on the music and making this album. There are three music videos, which I have also been working on.”

Tuesday marked not only the first time she dropped a full-length album but also her first showcase for the media, which was a “nerve-racking experience,” according to the singer.

“Everything is a first for me, an album and a [media] showcase. I’m just so nervous,” she said. “But don’t you get the feeling, when after you’ve studied so long for a test, you just want to get it over and done with? That’s how I felt, I was so nervous, but at the same time, I wanted to show it to you all. Now that I have shown it, I feel somewhat relieved.”

The album’s 11 songs showcase the singer’s range and span moods and genres. There’s a groovy R&B track, a serene breakup song and a bubbly love song, all of which vary in ambience but still carry the singer’s signature vibe.

Two songs have been chosen as the album’s lead tracks - a solo song also titled “She’s Fine” and “So, It Ends?” featuring singer Colde, both of which were composed and written by Heize herself.

“The title of the album is ‘She’s Fine’ because I wanted to tell people that it’s all fine,” said Heize. “I have my good days and my bad days. But I want people to feel a sense of consolation by listening to this song, that everything’s alright in the end.”

Her fans have often sought out her songs for their melancholy melody, something she’s likely to both change and live up to at the same time.

“‘She’s Fine’ is a style of song that I haven’t tried for a long time,” she said. “I rap in it and it’s quite upbeat. I wanted to give something like this to the fans. At the same time, I think ‘So, It Ends?’ will be a song that listeners will be expecting from me. That’s why we chose two songs.”

She added, “I focused on making this album [sound] very Heize, but not too much.”

Making her first-ever showcase even more special were appearances by singer Colde and rapper Simon Dominic. While Colde sang his part for “So, It Ends?,” Simon Dominic livened up the performance with his rap in “Dispatch,” the first song she wrote for the album.

The title of the song is a name of a famous - and somewhat notorious - local entertainment news outlet known for revealing the secret relationships of celebrities.

The song takes on the subject of how a woman feels after she breaks up with her secret lover: not being able to tell anyone of neither the relationship nor the heartbreak that came after.

“I was glad that I got to be a part of such a good song,” said Simon Dominic. “[The song] was about such an interesting topic, which was why I said I would do it as soon as I got it. I think Heize is a singer whose vibe will become brighter as time goes on.”

While the name Heize alone will attract people to listen to the entire album, the names of the other singers may draw even more fans: Simon Dominic, Colde, Sunwoo Jung A, Jooyoung, Nafla and DAVII. She chose singers who would best fit each song after she finished writing them.

Fortunately, they all accepted her invitation.

As strong a songwriter as she is, there were moments when she felt pressured by the fact that she was in charge of her own songs for the album.

“I do feel burdened sometimes, because it’s not like you always have something to say. There are times when I hit a wall with what I’m going to sing about. But I think the best and the only way to overcome that is to just let it pass naturally. If you live your life day by day, then it just goes away at a certain point,” she said.

Taking five years to release one’s first full-length album certainly is quite rare, but those years weren’t spent in vain.

“Every EP and single is precious to me, but the idea of a full-length album really hit me hard, because it’s going to be forever known as ‘the first’ album. That’s why I wanted to release it when I could really convey the messages and stories I wanted to tell to the fullest. And I thought that this was the right time to do so,” she said.

“I think that this is just the beginning.”