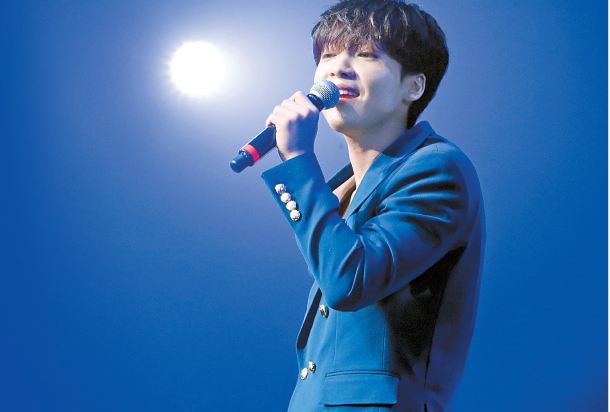 From a young rookie to a confident singer-songwriter, Jeong Se-woon has made a major change right in front of people’s eyes. Many people know him as the young singer nicknamed Ponyo who was a contestant on cable channel Mnet’s audition program “Produce 101” in 2017, but he’s now left that image far behind him.

Jeong dropped his second EP “Plus Minus Zero,” a six-track project that kicks off with the single “Feeling” on Tuesday. In the eight months since his last EP “Another,” Jeong has reflected on himself, which is where he found inspiration for his new music.

“If I am zero, then I have the plus sides of myself and the minus sides,” said Jeong before local press on Tuesday at a showcase held at the Yes24 Live Hall in eastern Seoul.

“I had the chance to really think about myself. What is it that I exactly have? How am I going to express my own music? I think that you can see the traces of those thoughts here and there in the album. It will be worth taking in each of the songs to see how I worked.”

Since he first appeared on “Produce 101,” Jeong has been known for his resemblance to the cute cartoon character Ponyo, thanks to his kind-looking eyes and soft personality. With “Feeling,” he tries to shake off that image and reinvent his public persona. In the music video for the single, he shows off a tougher and more masculine side of himself, which he admitted was “awkward at first.”

“It felt a little strange in the beginning, but I had fun with it because I discovered a new side of myself while [on set],” he said. Rather than thinking that the changes were not him, he asked for listeners to keep in mind three keywords for this EP: growth, maturity and success.

“It’s been just slightly less than two years since I debuted. I got to see the sides of myself that I need to work on, and I really learned a lot - which was all fun. I think finding my true colors was the fun part of the whole process. I would like people to see me mature.”

He added, “I think success is what you consider to be successful. If I think I succeeded with my goals, then that’s success in a way.”

But there was one person that wasn’t as happy with Jeong’s new look, Jeong said. “I have two big brothers, and one of them texted my mom after he saw the music video saying, ‘Mom, Se-woon’s eyes look funny.’”

Nevertheless, he made this album not to get good results, but for the sake of making the album itself.

“I want to be in music for a long time,” said Jeong. “I focused on the music for this album, and so I will humbly accept all kinds of feedback. My goal, when I first began music, was to just enjoy it, and I’m hoping to do just that in the future.”