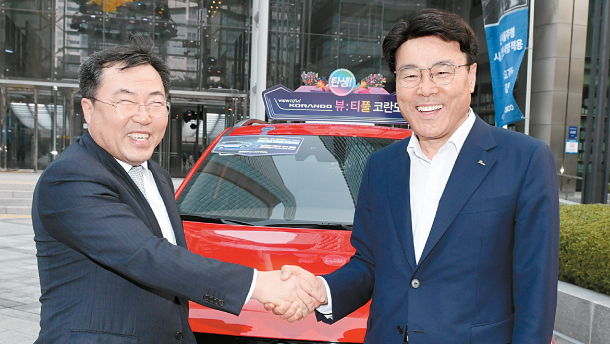 SsangYong Motor managed to remain the third-largest local automaker by domestic sales, a title it only reclaimed last year, in the first two months of this year according to monthly sales data Wednesday.

The carmaker won the title last year for the first time in 15 years thanks largely to the stable popularity of its Tivoli compact SUV and larger Rexton SUV lineup.

According to SsangYong, it sold 7,579 cars domestically last month, a 7.2 percent increase year on year.

January’s sales records were even worse for GM Korea and Renault as GM saw a 35.6 percent dive in local car sales year on year while Renault saw a 19.2 percent fall. SsangYong, on the other hand, enjoyed a 14.5 percent sales increase in January.

A SsangYong spokesperson said “joint efforts by the company and its labor union to develop new cars helped the automaker respond to changing market demands,” adding it hopes to become a prestigious SUV maker that offers the best car options to consumers increasingly leaning toward SUVs.

SsangYong has clinched wage deal with its labor union without dispute for the past nine years. When inking last year’s wage deal, SsangYong CEO Choi Johng-sik said the company and labor union had agreed to cooperate in order to accomplish the bigger goal of stabilizing company management.

The automaker filed for court receivership in 2009 in the wake of the global financial crisis when its owner, SAIC Motor, pulled out of the business. The company and the labor union have been striving to make a turnaround after being acquired by India’s Mahindra & Mahindra in 2011.

SsangYong is thinking this year may be a chance to make the turnaround dream a reality. It has high hopes on the Korando SUV, the first brand new Korando in eight years, released last month.

The company plans to sell 30,000 units of the latest Korando in Korea this year. CEO Choi said, “Korando will be a key model that helps our company bolster business performances and be recognized as a premium SUV maker,” during the car’s launch event held in Songdo, Incheon, last month.

In its latest effort to promote the car, SsangYong exhibited two Korandos in front of the Posco headquarters in Gangnam District, southern Seoul, from Tuesday. The exhibition will run through today. Korandos are made with high-end steel from Posco, the steelmaker said.