Judge in Gov. Kim case tells all to respect court

Judge in Gov. Kim case tells all to respect court 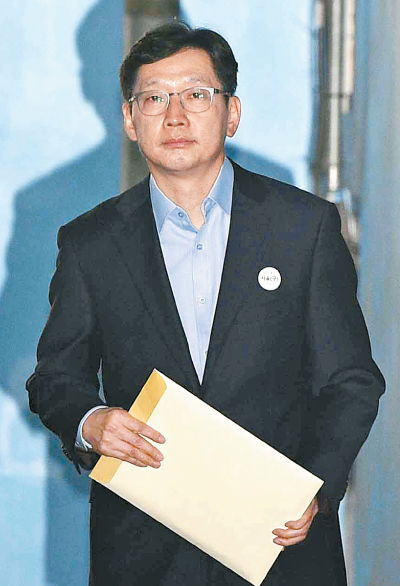 The presiding judge of the appeals court trying South Gyeongsang Gov. Kim Kyoung-soo’s case warned critics of the trial on Tuesday not to hold the court in contempt.

Before opening the first hearing in Kim’s appeals trial on Tuesday, Judge Cha Moon-ho of the Seoul High Court raised alarm over criticism of the court’s fairness by those on both sides of Kim’s controversial trial over online opinion rigging.

“Several [people] are taking the results of the trial for granted and are attacking judges’ prior experiences in what appears to be contempt for a verdict in a trial that hasn’t even begun,” Cha said.

“I’ve never experienced such a precedent,” the judge added. “This is an unthinkable situation in a civilized country.”

Cha went on to make an analogy between the trial and a sports game, comparing the courtroom to a sports field, the prosecutors and defense to players and the bench to referees. He added that there were many who were already making conclusions about the truth based on their support of or opposition to Kim based on inconclusive evidence, regardless of the truth.

“This is an act of insult and contempt against the sacred proceedings of the court,” he said.

The controversy around Kim Kyoung-soo’s trial involves both his status as a close ally and former aide to President Moon Jae-in and a major scandal hounding the judiciary that has spurred serious challenges to its neutrality from political and civic circles.

On Jan. 30, the Seoul Central District Court ruled that Kim was a principal offender in a major opinion-rigging scandal during the 2017 presidential election, sentenced him to two years in prison and ordered that he be placed under immediate detention.

This verdict was challenged by Kim’s supporters as well as many in the ruling Democratic Party, some of whom accused the presiding judge in that trial, Sung Chang-ho, of harshly punishing Kim in retaliation over the imprisonment of former Chief Justice Yang Sung-tae over a massive power abuse scandal in the judiciary.

During his tenure as chief justice, Yang allegedly ran the judiciary with an iron fist, cracking down on judges critical of his decisions while attempting to push through his agenda of establishing a new appeals court by meddling in politically sensitive trials to curry favor with the previous Park Geun-hye administration.

The appointment of Cha as Kim’s appeals court head justice caused many critics to cry foul as Cha has also been investigated by prosecutors over the judiciary meddling scandal. He allegedly tried to convince his cousin, another judge, to drop his opposition to Yang’s drive for a new appeals court.

While Kim was vocal about his misgivings related to Sung after receiving the verdict in his first trial, he and his lawyers did not raise similar doubts about Cha in the first hearing, and instead devoted most of their energy toward supporting the bail request Kim filed earlier this month.

“A conviction can be upheld or fought through remaining legal processes but my absence from South Gyeongsang’s governance is directly linked to the people’s livelihoods,” Kim said at his first hearing.

While the court said Kim’s status as governor was not a valid reason for bail, it added that a trial without detention was the “preferable” course of action if no valid reason was found to keep him detained.

Though the court’s statement merely outlined standard protocol on pretrial detentions, its statement nonetheless piqued speculation that Kim could be released on bail imminently. His release from custody could undermine the sentence he received in his first trial, which few, much less Kim himself, had expected.

According to Korean criminal law, only suspects who have committed serious felonies or are highly likely to tamper with evidence or flee are subject to pretrial detention. Kim’s lawyers have argued that none of these criteria are applicable to the governor, while the prosecution insists that he could further meddle with evidence if set free. The Seoul High Court is expected to rule on Kim’s bail after his second hearing on April 11.