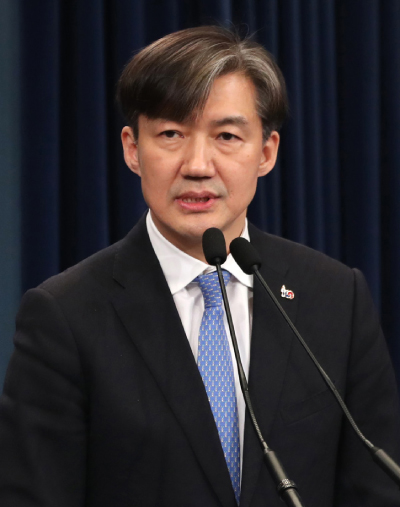 A key presidential aide responsible for combating corruption is facing renewed pressure to step down as a police officer who worked under him at the Blue House was named a criminal suspect in a mushrooming sex, drugs and police protection scandal.

A police senior superintendent, who worked in Cho’s office at the Blue House from July 2017 to August 2018, was named an investigation suspect Monday over suspicions he gave favors to the operators of the scandal-plagued Burning Sun nightclub.

The suspect, identified by his surname Yun, played golf with K-pop megastar Seungri and his business partner Yu In-seok, the co-owners of Burning Sun. They also dined together on multiple occasions, including the period during which he was working at the Blue House. Police suspect that the entertainment was a form of bribery.

At the Blue House, Yun worked with former Civil Affairs Secretary Baek Won-woo. He was responsible for collecting information on possible corruption involving the president’s family and relatives and gathering intelligence on public sentiment. He was the highest-ranking police official dispatched to the office.

“Cho and Baek were direct supervisors of Yun, and it is inevitable that they will become subjects of the investigation,” Rep. Na Kyung-won, LKP floor leader, said Wednesday. “I am afraid that [the police investigation] won’t be able to touch the Blue House,” she said, because both Cho and Baek are “Moon’s particular favorites.”

While Cho is still working at the Blue House, Baek has left and is reportedly preparing for next year’s general election.

Yun is accused of maintaining corrupt ties with Seungri and Yu. He was suspected of pulling strings to help the nightclub when it faced an investigation last July. Yun was also suspected of helping Seungri and his friends combat a probe into another nightclub they operated and helping another singer on a drunk driving case.

It appears that Yun’s Blue House supervisors failed to detect the suspicions.

“The office of the senior presidential secretary for civil affairs is open to criticism for having failed to supervise its members,” a Blue House official told the JoongAng Ilbo on Tuesday after the Blue House was swept into the scandal because of Yun’s alleged misconduct. “It is true that Cho is ethically responsible.”

Yet the Blue House official said the police agency was responsible for selecting the officers it sent to the Blue House, saying, “The fact that a corrupt one was recommended backs our campaign to reform the investigative authorities.”

Cho did not issue any statement as of Wednesday.

In addition to not supervising the scandal-ridden cop, Cho was also criticized for failing to properly vet minister nominees. President Moon nominated seven new ministers earlier this month, and confirmation hearings at the National Assembly will soon take place. “The latest reshuffle is worse than the worst,” said LKP Chairman Hwang Kyo-ahn said Wednesday. “The nominations are astounding.”

Hwang said the nominations are far below the appointment standards the Blue House and Moon promised earlier.

“Why did they create the standards if they won’t respect them?” Hwang said.

According to Hwang, the land minister nominee owns three apartments, despite the Moon administration’s policy that real estate should not to be used to make profits.

Hwang also said the unification minister nominee has made many controversial remarks, including a denial that the North torpedoed the Cheonan warship in 2010.

“There are various issues concerning the nominees, such as plagiarism, draft-dodging, use of false address and seeking favors for a child’s employment,” Hwang said. “The Blue House said it had vetted them all. If they were nominated despite those serious problems, I suspect that the Blue House is indifferent to ethics.”

The Bareunmirae Party also issued a statement on Tuesday that demanded Cho be sacked for his poor vetting of the nominees.

“There was enough time to prove that Cho was incompetent,” it said, urging Moon to replace him as soon as possible.

Since the launch of the Moon administration, Cho has repeatedly faced demands he step down for failing to do his job.

In April last year, the National Election Commission ruled that Kim Ki-sik, then the nominee to head the Financial Supervisory Service, had previously violated election laws. Three opposition parties, including the LKP, demanded Cho step down for having failed to vet the candidate.

Cho was summoned to testify at the National Assembly when special inspectors in his office were accused of corruption in December last year.

Cho, a professor of law at Seoul National University, was appointed to the post, often occupied by top prosecutors, when Moon took office in May 2017. His job includes combating corruption among senior government officials and reforming investigative authorities, including the prosecution.