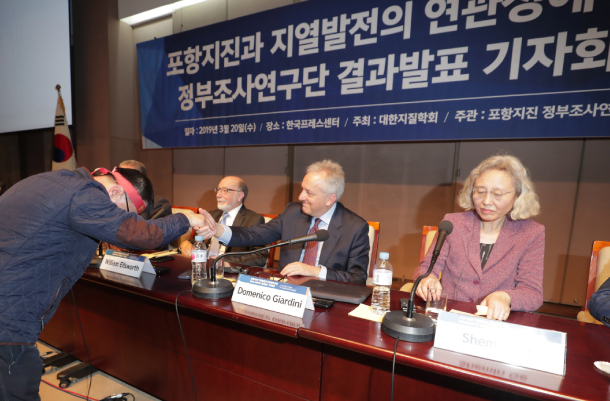 A resident of the North Gyeongsang city of Pohang greets a member of the international research group at the Korea Press Center in central Seoul on Wednesday, where the group announced that a 5.4-magnitude earthquake in 2017 in the city was likely caused by the geothermal power experiments conducted there since 2010. [YONHAP]

South Korea’s second-strongest earthquake ever, which struck the southeastern city of Pohang in November 2017, was likely triggered by the government’s geothermal power experiments, an international research group led by the Geological Society of Korea announced Wednesday.

The group analyzed 520 earthquakes in Pohang, North Gyeongsang, from January 2009 to November 2017, of which around 240 took place within five kilometers (three miles) of a site where the Ministry of Trade, Industry and Energy had been experimenting with the Enhanced Geothermal System (EGS), a technology that turns geothermal power into electricity and involves fracturing of hot underground rock with pressurized liquid, known as hydraulic stimulation.

“Of the 240, we were able to pinpoint the exact location of epicenters for 98 earthquakes,” said Lee Kang-kun, president of the Geological Society of Korea, at a press conference at the Seoul Press Center in central Seoul on Wednesday.

“And we found that those quakes coincide with the time and location of the EGS experiments,” Lee said.

According to the group, there were at least five hydraulic stimulations from the EGS experiments that significantly disturbed the faults in the area, which, in turn, “triggered” the Pohang quake in 2017.

The research, supported by the government and conducted from March 2018, involved 19 experts including Shemin Ge, professor of geology at the University of Colorado Boulder, Domenico Giardini, professor of seismology at ETH Zurich, and William Ellsworth, professor of geophysics at Stanford University.

The research was ordered by President Moon Jae-in after public concerns were raised over the possibility that EGS experiments in Pohang since 2010 may have triggered the destructive quake in November 2017.

A 5.4-magnitude earthquake, the second-strongest quake ever recorded in Korea, hit Pohang on Nov. 15, displacing nearly 1,800 people and injuring 135.

The Bank of Korea said the quake damaged some 57,000 structures, inflicting costs worth over 300 billion won ($265 million).

The study was conducted against the backdrop of other opinions in the field of seismology, such as that of Hong Tae-kyung, a professor of seismology at Yonsei University, who said that the Pohang quake was caused by natural causes, including the 9.0-9.1 magnitude earthquake in Japan in 2011 that likely affected the faults beneath the Korean Peninsula, leading to the 5.8-magnitude earthquake in 2016 in Gyeongju, North Gyeongsang, which was the strongest quake to ever hit Korea, and the Pohang quake that followed.

The Ministry of Trade, Industry and Energy said on Wednesday that it accepts the findings “with humility.”

“The government accepts the results of the study with humility, which was launched after the president ordered an inspection into what effects geothermal technology development in the area may have had on the Pohang quake,” the ministry said in a statement released shortly after the research group’s press conference Wednesday.

“We express deep regrets to the Pohang residents affected by the quake,” it said.

The ministry said that it will shut down the EGS experiments in Pohang, which were temporarily put on hold last March after the public began to raise questions about the experiments and their possible ties with the Pohang quake.

“We will also inject 225.7 billion won in the next five years for reconstruction work in Pohang,” the ministry said.