This bridge is made for walking

This bridge is made for walking 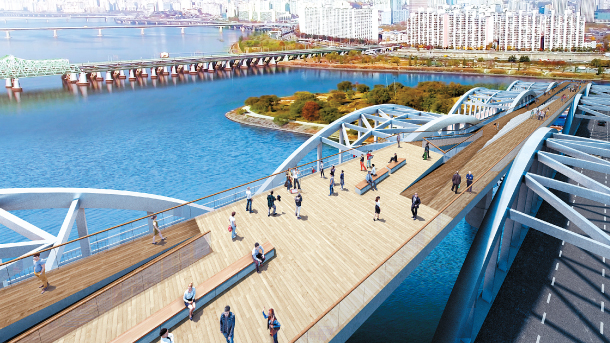 A rendering provided by the Seoul city government on Wednesday shows a new footbridge planned for the Han River. The Seoul city government said Wednesday it will build the new Han River bridge solely for pedestrians by 2021. The new footbridge, which will be built alongside the existing Hangang Bridge, will link southern Seoul’s Noryangjin area with Nodeul Island, an uninhabited artificial island in the Han River that hosts an ecological park. The Seoul Metropolitan Government said the new footbridge will be 500 meters (1,640 feet) in length, 10.5 meters in width and cost about 30 billion won ($26.6 million). It will have a transparent glass floor section, an observatory and an event plaza. The government said it will decide later whether to build a separate footbridge linking Nodeul Island to central Seoul’s Yongsan District to the north. [SEOUL METROPOLITAN GOVERNMENT]