Bolivia match will be a fresh start

Bolivia match will be a fresh start 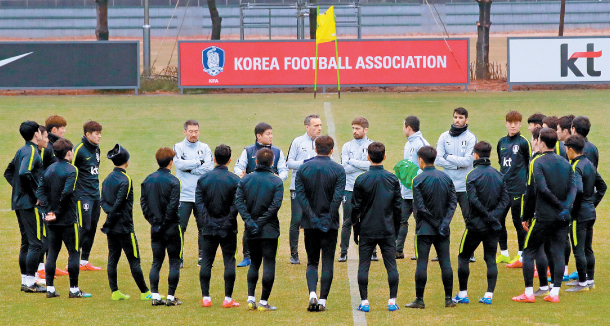 The Korean national football team players and coaches huddle before starting their training at the National Football Center in Paju on Wednesday. [YONHAP]

Korea will try to get a fresh start after its disappointing exit at the Asian Football Confederation (AFC) Asian Cup when it faces Bolivia this week.

Korea, 38th in the latest FIFA rankings, will welcome No. 60 Bolivia for a friendly football match at Munsu Football Stadium in Ulsan, some 400 kilometers (249 miles) south of Seoul, today.

This is the first match since Korea was eliminated in the quarterfinals against eventual champions Qatar at the Asian Cup in January. After taking on Bolivia, Korea will host Colombia in Seoul on March 26.

Putting its Asian Cup disappointment aside, Korea now has its sights on qualifying for the 2022 FIFA World Cup in Qatar. The second round of the Asian World Cup qualification starts in September.

Through friendly matches, Korea head coach Paulo Bento will try to find new assets that can be utilized during the World Cup qualifying campaign. He is also tasked with filling the void left by veteran midfielders Ki Sung-yueng and Koo Ja-cheol, who announced their national team retirements after the Asian Cup.

Bento has a 27-man roster for the upcoming friendlies, and five of them have been called up for the first time under the Portuguese coach’s reign.

Among the new faces, two midfield prospects who play in Spain — Lee Kang-in of Valencia CF and Paik Seung-ho of Girona FC — earned their first senior call-ups and are expected to make their international debut.
Lee, 18, is the seventh-youngest Korean player to be selected to the national football team, while Paik, 22, is a former FC Barcelona B player known for his versatility. Bento said he will try to find the best position for the two.

Bento will also have a chance to test Kwon Chang-hoon, who plays for French side Dijon FC. The energetic attacker was considered a sure pick to represent Korea at the 2018 FIFA World Cup and the 2019 Asian Cup, but was forced to skip the tournaments due to an injured heel. He will step in for Hamburger SV forward Hwang Hee-chan, who is out with a thigh injury.

Eighteen of the players on Bento’s squad were in the United Arab Emirates (UAE) for the Asian Cup, and the 49-year-old head coach is likely to stick to his main 4-2-3-1 formation that was used during the continental tournament.

One change from Bento’s usual lineup would be a right-back position, where the national team starting right-back Lee Yong is absent due to a foot injury.

It will be interesting to see how Bento uses Korea’s attacking ace Son Heung-min. Although Son’s red-hot form has cooled in recent weeks, the Tottenham Hotspur star has so far scored 16 goals in 37 matches for the London club across all competitions this season.

At the Asian Cup, Son played more like an attacking midfielder, focusing on helping his teammates, instead of scoring goals. Yet Bento may order Son to move more aggressively and partner with team’s main goal poacher Hwang Ui-jo up front.

Korea has faced Bolivia twice so far, and both matches ended in draws. The two sides last met on June 7, 2018, in Austria ahead of the World Cup, and they played to a scoreless draw.

Six players — Kim Seung-gyu, Kim Young-gwon, Lee Seung-woo, Jung Woo-young, Son Heung-min and Lee Jae-sung — will be more familiar facing Bolivians than others since they competed against them in the World Cup tuneup match.