A visitor stands before David Hockney’s “A Bigger Grand Canyon” (1998), pictured right, which is displayed as part of the “David Hockney: Works from the Tate Collection” exhibition that kicks off today at the Seoul Museum of Art, central Seoul. [MOON SO-YOUNG]

A new exhibition of work by one of the world’s most influential living artist that opened today at the Seoul Museum of Art (SeMA) is making a splash. Tickets to the British-born, Los Angeles-based artist David Hockney’s first large-scale solo exhibition in Asia went on sale March 8 and according to the museum, the exhibit is one of the museum’s fastest selling special exhibitions ever.

A total of 133 pieces of Hockney’s works made it to Seoul, and although the exhibition is co-organized with Tate, it is very different from the successful 2017 retrospective of the artist that was held at the British museum.

“This show is made up primarily from Tate’s collection of Hockney. The retrospective was a temporary exhibition of loans from public and private collections internationally, where in fact only perhaps six or seven pictures from the [Tate] collection was in that show.

“This is a unique show because of its origins from one collection which has been punctuated with a few things from other places. They are quite different. But, that said, the way in which they take you on a journey through Hockney’s work, from the early period in the 1960s to the present, is relatively similar - but the works themselves are different,” she added.

The exhibition is largely divided in three sections: the Early Period, the Mid Period and the Present, and starts off on the second floor of the museum with two paintings that are “uniquely Hockney in both form and content,” says Little.

They are “The Third Love Painting” and “Tea Painting in an Illusionistic Style.”

“Hockney burst onto the London art scene as a post-graduate student at London’s Royal College of Art,” said Little. “This ‘The Third Love Painting’ was made when he was growing disillusioned with abstract art, but because he didn’t want to be considered old fashioned for making figurative pictures, he began to develop his own unique language, blending gestural painting, graffiti and recognizable subject matter that dealt increasingly with his homosexuality.”

“Tea Painting in an Illusionistic Style,” on the other hand, Little explained, shows when the artist began to reject the label of being positioned as part of the emerging Pop movement, preferring to make images in a variety of styles. 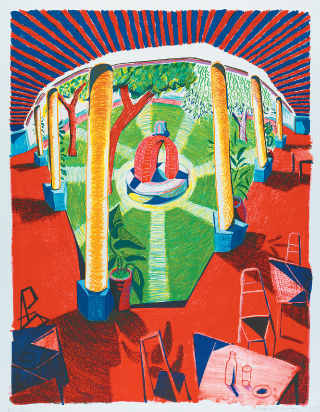 Visitors can witness his iconic work of “A Bigger Splash” (1967) in this section, together with other works he produced while living in the Santa Monica area of Los Angeles beginning in 1964. According to Little, a subsequent body of paintings, drawings and prints from its collection represent Hockney’s early Los Angeles phase where images of showers, buildings, interiors and gardens depict the “ambiguous space and light of the city in a cooler and more detached way.”

“Water Pouring into a Swimming Pool” (1964) is also among the works on display at the Seoul show. Little explains this painting is “one of a number of works that captures Hockney’s fascination with portraying pouring and moving water, the image taking on an almost abstract appearance.”

On the third floor, the exhibition delves into the artist’s Mid Period, showcasing how Picasso’s death in 1973 impacted his style.

As seen in “The Blue Guitar” (1976-7) series, the works show Hockney’s great admiration for Picasso. Many graphic works can be seen at this second part of the exhibit. This is when, according to the curator, Hockney began to shift his focus and began investigating Cubism, pictorial space and the representation of 3-D realities in 2-D.

One of the highlights of the exhibit is the grand “Bigger Trees Near Warter” (2007) that measures approximately 12 meters (40 feet) in width and 4.6 meters in height. It is composed of 50 small panels that create a single painting featuring English trees - a typical Yorkshire landscape.

“Taking up the challenge of painting outside on a large scale, Hockney employed computer technology that enabled him to photograph each panel and track the development of the overall image,” said Little. “This combination of traditional and state-of-the-art methods has characterized much of Hockney’s practice over the last 25 years.

Yet fans of Hockney’s Polaroid and photography collages works may be disappointed as they are not included in this collection.

“Obviously every collection has its gaps and one of the gaps in the Tate’s collection is the representation of photography,” Little explained. “And that isn’t because it doesn’t desire those pictures. They are very important. But it’s because they are not in any public collections. They belong to the artist and they are very seldomly loaned. It’s extremely difficult to represent all aspects of Hockney’s works. We are trying to do the best we can with our collection and we address photography in a slightly different way.”

To bring Hockney’s work up to date for the Seoul exhibition, the organizers managed to bring “In the Studio, December 2017” (2017), which was recently gifted to Tate by Hockney. It is a panoramic photograph of the artist standing among old and new paintings dotted around his studio in the Hollywood Hills. It is made of 3,000 photographs that have been digitally stitched together to produce a photographic drawing, explained Little.

“Its sense of here-dimentional moving focus sums up Hockney’s belief that perspective is constantly changing according to how our eyes move,” said Little. “Having just received this work from the artist’s studio before traveling to Korea, this piece has yet to be shown at Tate and we are delighted that it can be included.”

After the exhibition in Seoul, it will move to Beijing and also to Hamburg.

“David Hockney: Works from the Tate Collection,” which kicks off today at the Seoul Museum of Art, central Seoul, runs until Aug. 4. Admission is 15,000 won ($13.29) and can be purchased via ticket.melon.com. The museum is open every day except Mondays from 10 a.m. to 8 p.m. On weekends and public holidays, the museum closes at 7 p.m, and it remains open until 9 p.m. every second and fourth Wednesday of the month. For more information, visit www.davidhockneyseoul.com or call 1833-8085.