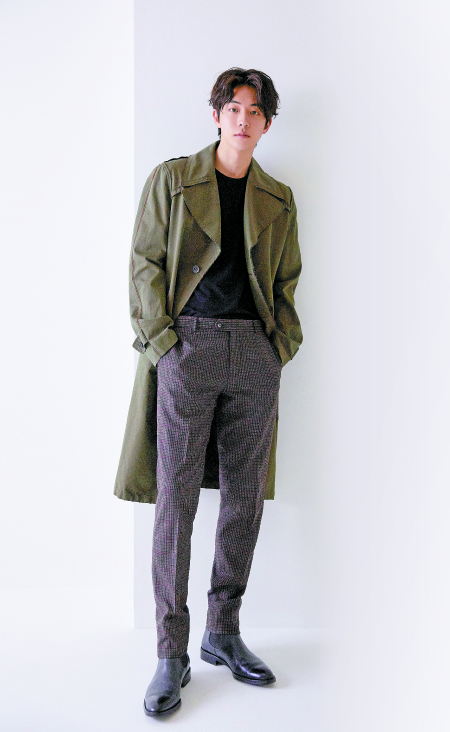 “Dazzling,” also known as “The Light in Your Eyes,” was going to be just another fantasy drama about a girl in love who could maneuver through time - or so we thought.

Last Tuesday’s episode came as a complete shock to everyone when they realized that protagonist Kim Hye-ja, who they thought was a 25-year-old (Han Ji-min) stuck in the body of a 70-year-old (Kim Hye-ja) due to the technical failures of time traveling, was, in fact, an elderly woman with Alzheimer’s lost in her memories.

The revelation that the protagonist’s love interest and later husband Lee Joon-ha (Nam Joo-hyuk) had died from torture as an activist-journalist under the dictatorial government of the 1970s moved many viewers to tears.

Just before the 12-part JTBC series aired its final episode on March 19, the Korea JoongAng Daily met up with rising actor Nam Joo-hyuk to discuss his latest role.

“Joon-ha’s character was very emotional,” Nam, 25, said in a soft-spoken, steady tone during the interview at a cafe in Hapjeong-dong, western Seoul. “I had so many moments where I felt bad for Joon-ha, which drained me emotionally. I cried a lot on set while filming.”

Nam played multiple roles in the series, also portraying a Joon-ha look-alike who works as a doctor at the hospital that 70-year-old Hye-ja visits.

“I didn’t know too much about Alzheimer’s when I first received the script, but the director helped me understand the condition better before filming,” Nam said. “I learned a lot from this drama, and I feel so grateful that I had a chance to work alongside veteran actors like Kim and Han.”

For Nam, the drama was especially meaningful because a lot of people, including his grandmother, could empathize with it. 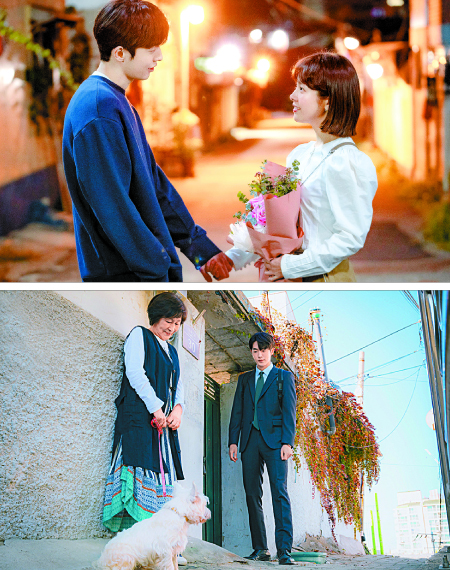 “My priority when deciding my next project is to choose a drama with a plot that many people can relate to, whether it’s romance or a life story.”

“I was able to watch ‘Dazzling’ together with my family because we wrapped up production before the show aired on television. Although ‘Dazzling’ was on after my grandma’s bedtime, she stayed up late to watch it together with us. When I was in middle school, long before I dreamt of becoming an actor, my grandma told me that it would be really nice to see me in dramas. I feel like I made her wish come true.”

After kicking off his career as a model in 2013, Nam discovered his passion for acting while filming the music videos for duo Akdong Musician’s 2014 hit songs “Give Love” and “200%.”

“I got a feeling that sparked my curiosity, making me want to challenge myself,” Nam explained, speaking about the experience.

“Some time afterwards, I joined this drama called ‘The Idle Mermaid,’ and seeing my colleagues being so happy while acting strengthened my dream and determination to become an actor. I think a person’s dream can always change.”

Nam has since appeared in around 10 dramas as both supporting and lead roles, including in romance-thriller “Cheese in the Trap” (2016) and fantasy series “The Bride of Habaek” (2017).

Last year, Nam debuted in the big screen historical film “The Great Battle.” Nam starred in the movie alongside Zo In-sung and Park Sung-woong, where they reenact the historical battle of Ansi Fortress that pit Goguryeo (37 B.C. - A.D. 668) forces against Tang Dynasty invaders in 645.

Though Nam has been praised by fans for his ever-progressing acting skills, the young actor admitted that he has a long way to go.

“There was a project I worked on where I thought to myself ‘I got this.’ I was sorely mistaken. I feel like I’m really lacking, but it’s good because it forces me to work harder and stay on track.”

“Every new year, I always set a resolution to become a better person than the year before. After I started basketball in middle school, I learned that things will work out if you never give up, no matter how difficult and long it takes.”

Acting is a never-ending assignment for Nam, who says he picked up a few new habits since launching his new career.

“I began inspecting a lot of people, which could actually be scary. I also don’t let my feelings easily pass and think about them more carefully.”

When he’s not acting, Nam says he likes to “stay home and lie on [his] bed” or “play with [his] puppies.”

Nam is currently working on the Netflix original series “School Nurse Ahn Eun Young” (working title), a fantasy-comedy drama based on the novel of the same name set to air early next year. In the show, he portrays a high school teacher who helps his new colleague (Jung Yu-mi) chase away ghosts.

“I have a really shy personality. I’m thankful that so many people think highly of me. I want to tell my viewers to be happy.”