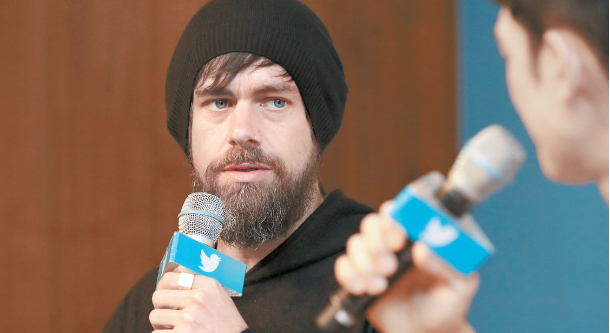 Korea is big for Twitter, and K-pop leads with the BTS account being the most retweeted in the world.

“K-pop loves Twitter, Twitter loves K-pop - certainly we benefited massively from people choosing us to have a conversation about their passion,” Jack Dorsey, Twitter CEO and co-founder, said Friday.

According to the company, Korea was the second-fastest growing Twitter market last year in terms of revenue. The year, it could take the lead.

Dorsey is on a world tour visiting regional offices. The press conference held Friday in central Seoul was his first official encounter with local media.

In relation to the K-pop boom on Twitter, he noted that compared to other social media platforms, Twitter differs in that it shows the “thinking process” of celebrities and fans.

“Because we’re a conversational medium … it’s not composed of comment after comment but a conversation, so it resolves and builds. I think a lot of K-pop [stars] have realized the medium in that sense and utilized it.”

According to Twitter Korea, 5.3 billion tweets last year were K-pop related. This is nine times the number of tweets on the 2018 World Cup. 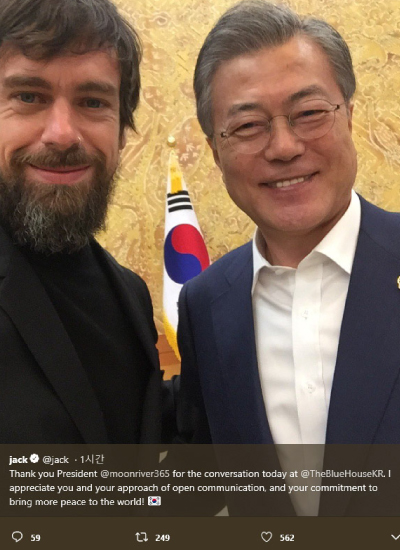 Jack Dorsey posted a picture he took at the Blue House with President Moon Jae-in during a meeting on Thursday on his Twitter account. [TWITTER CAPTURE]

Another Twitter hashtag he mentioned was #SchoolMeToo. The School Me Too movement was led by Korean students and was used to accuse teachers of sexual harassment and sexist comments. It was the most tweeted social issue last year in Korea, scoring higher than the U.S.-North Korea summit. The Education Ministry pledged to develop a realistic approach to address such practices.

“The Me Too movement in general is something we’re really proud of in terms people choosing us to share their experience in a way that resonates with so many others in the world,” said Dorsey.

“To see young people take to a platform like ours and simply speak about injustices they face that ends up being a national conversation - and in this case a global conversation - changes things. We’re fortunate and humbled and honored that we can be one small part of that.”

On remarks that Twitter has been connected to fake news, hate crimes and extremism, Dorsey said the company was making efforts to promote healthy conversation. It starts with acknowledging “a connection between what happens online and offline.”

“We’re looking very critically on what is capable on our network … in order to artificially amplify information and spread it unfairly,” he said. “We’re looking at using machine learning, deep learning and artificial intelligence to catch this artificial propagation faster and diminish this reach.”