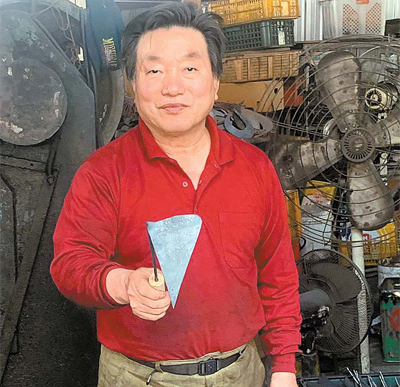 Seok No-ki, a blacksmith from Yeongju, North Gyeongsang, makes his Youngju Daejanggan homi by hand. He has been making homi by hand for 52 years. [KIM YOON-HO]

Homi, a traditional Korean hand plow, has recently become a surprise hit on Amazon in the United States.

Seok No-ki, a blacksmith from Yeongju, North Gyeongsang, makes his Youngju Daejanggan homi by hand. It has become one of the top ten gardening tools on Amazon, the largest e-commerce site in the world. The recent interest in homi, which are shaped like a half-moon, is due to their easy-to-use and practical nature.

This recent trend started as the product’s sales started growing on Amazon last year. Its recent popularity also came from reviews and several popular YouTube videos praising the tool and showing how to use it.

The success of homi has also spread to other online shopping sites. Homi that originally sell for 4,000 to 5,000 won ($3.50 to $4.40) in Korea sell from anywhere between $14 to $20 on overseas websites. Americans who aren’t used to using curved gardening tools for shoveling praise it for “not putting any strain on one’s wrist.”

Seok is quite surprised by the recent popularity of homi.

“I have had my blacksmith workshop for 43 years and made homi for 52 years, but I still can’t believe the popularity of the product in the United States. When I read the retailer was Amazon, I thought it meant a bunch of Korean middle-aged women were going to use their homi in some forest,” said Seok.
“I had been selling homi through a distributer for about ten years and would send them three to four tools a month, but orders had suddenly been rushing in [through the site] last year,” he said. “I think I exported over a thousand homi in the last six months of 2018, and another thousand in the first three months of this year. There have even been orders from Nepal and other countries.”

Seok recycles truck springs to create his homi. He gets the springs from spring factories or recycling businesses, and he used truck spring metal or leftover metal cut out during the manufacturing process. The sturdy material is perfect for making homi.

When Seok brings in the springs, he cuts them into squares according to the size of the homi. He heats the metal by putting it in and out of a kiln and hammers it each time. After heating the metal about seven times and hammering it a few thousand times, the homi finally takes shape. He then installs a wooden handle. He then inscribes “the best craftsman Seok No-ki” on his work.

Seok’s homi are 100 percent hand-made. If one or two of his neighbors in their 70s help, he can make up to 120 a day, while alone he can produce around 60. It takes about 30 minutes to make one.

“The Youngju Daejanggan homi popularity comes from it being hammered by hand, which makes it more elaborate and sturdy than ones made in China,” said the blacksmith.

Seok, who has been a blacksmith since he was 14 years old, has been looking for a successor. He had almost given up, as there was no one that came to his shop in order to be his apprentice. Fortunately, after his success on Amazon, people who want to learn how to make this tool are now calling on his shop. Recently, a young Korean living overseas has decided to come to the shop in May, and another from Gyeonggi will be coming next month.

Seok’s aspiration is to improve the quality of his homi and find ways to deal with counterfeit homi that use his brand.
“I will be making more of them as an act of patriotism,” Seok said.