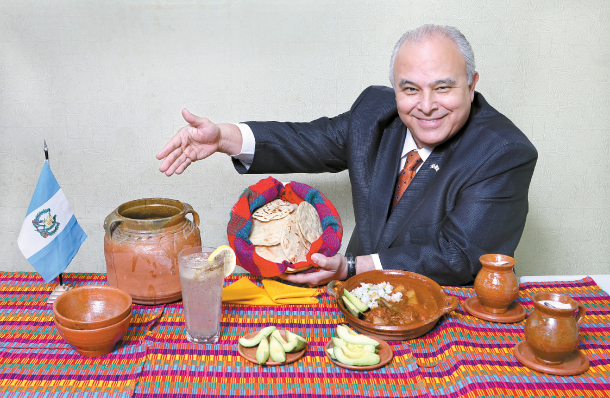 Herbert Estuardo Meneses Coronado, ambassador of Guatemala to Korea, presents signature dishes from his country, including pepian, chia lemonade and arroz con leche, which is also enjoyed throughout Latin America, at the Suwon Food & Tourism College in Gyeonggi on March 6. [PARK SANG-MOON]

We are asking these questions to ambassadors in Seoul for our latest public diplomacy series, “Table Talk.” The book, its author and what they say about the country is discussed over a table full of national dishes. What better way to start an exploration of a new land than through food, good writing and a personal guide dedicated to building bridges between countries - right here in Korea? - Ed.

Buried deep in the jungles of Guatemala are thousands of Mayan buildings yet to be discovered.

“They discovered some of the biggest Mayan settlements underground last year,” said Guatemalan Ambassador to Korea Herbert Estuardo Meneses Coronado. “A group of archaeologists and scientists used a type of laser technology to scan what may be under the jungles and mountains of Guatemala, covering some 2,000 square kilometers [494,210 acres]. And what they saw was stunning.”

Some 60,000 structures, including a pyramid located under a mountain, have yet to be excavated in the land once inhabited by the ancient Mayan civilization centuries ago.

“The pyramids - there was only one reason the Mayans built them, and it was to see the stars,” Meneses said. “The Mayans studied the stars and invented one of the world’s first calendars, including both lunar and solar calendars. Recently, we discovered one of the biggest pyramids in the world, La Danta. You can hike up there from Carmelita, but expect to hike for days before you reach the peak.”

If there is a book to pick up before braving the peaks of ancient Guatemala, the top envoy said he would recommend a work by Miguel Angel Asturias, a 1967 Nobel Prize laureate in literature.

“He identified himself with the Mayan world, despite not being indigenous, and wrote many books, poems and literature about the Mayans,” Meneses said. “His works, which include ‘Legends of Guatemala’ and ‘Men of Maize,’ provide a glimpse into the Mayan world.”

A lawyer, writer, journalist and diplomat, Asturias spent years studying about Mayan civilizations and their religions at the Sorbonne University in Paris upon finishing his law studies in Guatemala.

For a look into a more modern period of Guatemalan history, Ambassador Meneses recommends “El Senor Presidente” by Asturias, which is also available in English and Korean.

“It is a novel that talks about a dictator, which experts usually identify as Manuel Estrada Cabrera, at the beginning of 20th-century Guatemala,” Meneses said. “The author describes a society of his time so you have to interpret it from that point of view.”

“El Senor Presidente” was published in 1946 when Asturias was a cultural attache at the Guatemalan Embassy in Mexico.

Over dishes from Guatemala like pepian, a signature spicy stew with freshly made tortillas, and fresh cups of chia lemonade, lemonade with chia seeds, Ambassador Meneses discussed the history, people and gastronomy of Guatemala throughout the ages. 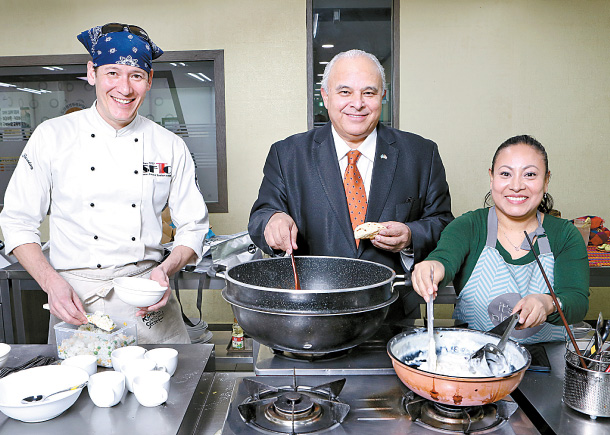 Q. “El Senor Presidente” is considered one of the earliest novels on dictatorships.

A. The book is fiction, so we cannot say that it was a real depiction of what happened in Guatemala at the author’s time. But the work relates to the terrible acts of a dictator and how those can influence citizens individually and collectively. The book constitutes, in my opinion, a denunciation of the cruelty of an authoritarian government.

Former Korean President Park Chung Hee has the controversial image of being both the man who helped modernize Korea’s economy and someone who ruled the country as a dictator. How do Guatemalans evaluate its history with some of its leaders?

All governments have its good and bad sides - it’s not always one or the other. If you’re someone who has lived through that time period, you may think differently about some of the works written about that time than someone who hasn’t. And, if you had seen positive results from governmental decisions in the past, you may make positive assessments about the leader. It also depends on what age you were and what time you lived through at the time. You would see the past based on your experience. So it’s hard to give a simple answer.

The plot of the book seems to proceed against the backdrop of an impending revolution.

In Guatemala, we had one revolution in the last two centuries which overthrew a dictator, Jorge Ubico, on Oct. 20, 1944. The process was a peaceful one, without a single shot or drop of blood spilled. What happened during and after the revolution is analyzed differently as people evaluate history with diverse opinions.

Your arrival to Korea was timed coincidentally with a revolution of its own in Korea.

I arrived in November 2016, when demonstrations in Gwanghwamun Square[, central Seoul,] were happening every weekend. And I saw many ladies partaking in the demonstrations crying.

It was only later when I asked a friend that I got an answer as to why: they were crying because they felt sorry for how the country was being portrayed in the world in the midst of the scandal [surrounding former President Park Geun-hye, who was impeached and removed from office in 2017]. There were so many people on the streets rallying every weekend, yet there was so much order to it all. That is culture. That is education. People in Korea know how to exercise their rights and they know the right way to do it. I knew then that this is a strong country with people who can defend their democracy. Because I know the path that Korea had taken for its democracy, peace and development was not an easy one. 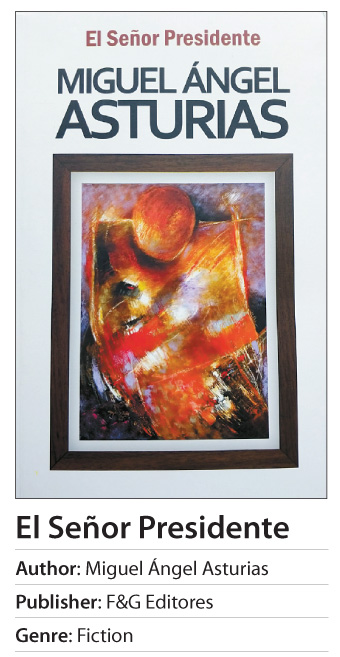 “El Senor Presidente” by 1967 Guatemalan Nobel Prize laureate in Literature Miguel Angel Asturias is recognized as one of the earliest fictional studies on dictatorships. The surrealistic dream sequences in the book are noted by experts as a precursor to a literary style now known as magical realism.

Asturias was awarded the Nobel Prize in Literature “for his vivid literary achievement, deep-rooted in the national traits and traditions of Indian peoples of Latin America.” Would you say his literary styles of surrealism and magical realism has a Mayan influence?

Asturias was not indigenous, but he studied the Mayan world. His works display a style that later came to be called “magical realism.” Experts say that Asturias united two things: the themes of mysticism and the legends of the Maya with the desires and the social and moral beliefs of both the impoverished and the indigenous people.

Where in Guatemala can you see remains of Mayan settlements?

Guatemala is at the heart of Mayan culture, since it was precisely in our territory where Mayan civilization established itself and flourished. Our land, part of the Mayan Biosphere, is rich with numerous rivers, mountains, volcanoes and minerals. We have more than 300 microclimates. The country’s population consists of native people like the Mayans, Xinca and Chorti, as well as Afro-Caribbean people and ladinos (non-indigenous people). The Peten Department (Guatemala has 22 departments, which is further divided into districts) has many archaeological sites, including the most important ceremonial center of the Mayans, called Tikal. This is where a group of archaeologists found the underground Mayan settlements last year.

Tell us about the latest in Korean-Guatemalan relations.

Our relations have lasted for 56 years and Korea and Guatemala have cooperated on projects related to education, security, infrastructure, technology transfer and agriculture. Korean investment in our textile industry is quite large, given that thousands of Koreans have come to invest in the industry since the 1980s.

The Guatemalan mission in Korea has been trying to develop scholarship opportunities for Guatemalan students to study in Korea in fields more relevant for our society, such as agriculture, arts, sports, medicine, social welfare and business for small and medium-sized enterprises.

What’s the culture surrounding enjoying food together in Guatemala?

Special occasions that call for family get-togethers include Christmas and New Year’s and any birthdays in the family, but also the Day of All Saints on November 1. But on a normal weekend, families like to get together and enjoy food together, usually with music in the background, music played with the marimba. Lunch appointments often run late into the evening and always include coffee and sometimes dessert.

We can’t leave out Guatemalan coffee.

Guatemalan coffee is one of the most highly valued in the world, especially in Korea. Because of Guatemala’s diverse climate, the types of coffee beans produced in my country vary quite a bit. Coffee beans grown in Acatenango Valley, for example, located at some 2,000 meters (6,561 feet) above sea level, are full of minerals due to its proximity to the Fuego volcano and are very good quality. Coffee beans grown on the slopes of volcanoes that surround Lake Atitlan have a more citric acidity and those in the cloudy and rainy climate of Coban have a pleasant aroma.

Our country will be the main representative of this year’s coffee expo, which will be held from April 11 to 14 in Coex, southern Seoul. Don’t miss it! 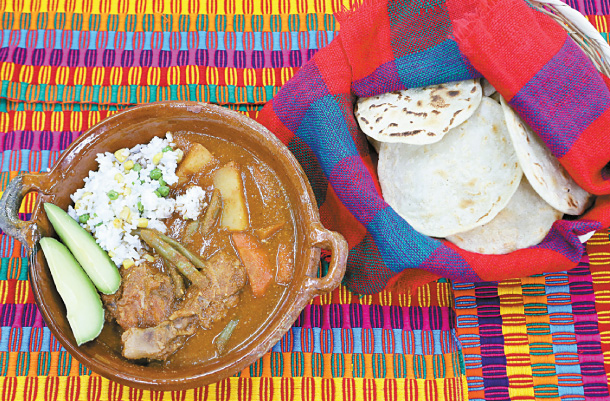 2. Roast half a cinnamon stick, 1 tbsp of allspice berries, six cloves, six black peppercorns and 1 tbsp of coriander seeds in a pan over medium heat until fragrant. Transfer to a bowl.

3. Place 1 tbsp of chili flakes, 1 tbsp of pumpkin seeds, 1 tbsp of sesame seeds and dried oregano to a frying pan and toast them at medium heat until the sesame seeds are golden brown. Place all spices and roasted seeds in a grinder and blitz to powder.

4. Heat 1 tbsp of oil in the frying pan, add two onions, quartered, eight whole tomatoes and three cloves of garlic and cook until the onions are golden brown. Remove from heat and remove the skin off the tomatoes and chop everything.

5. Tip the spices and vegetables into a blender, add 1 liter of chicken stock and blend until smooth. Pour into a large pan.

6. Mix 2 tbsps of chicken stock with 1 tbsp of corn flour until smooth and stir it into the pan. Bring to boil, stirring until the mixture thickens slightly. Add the beef or chicken, two potatoes and one squash to the pan, lower the heat, cover the pan and simmer for about 30 minutes or until the vegetables are tender. Enjoy with corn tortillas! 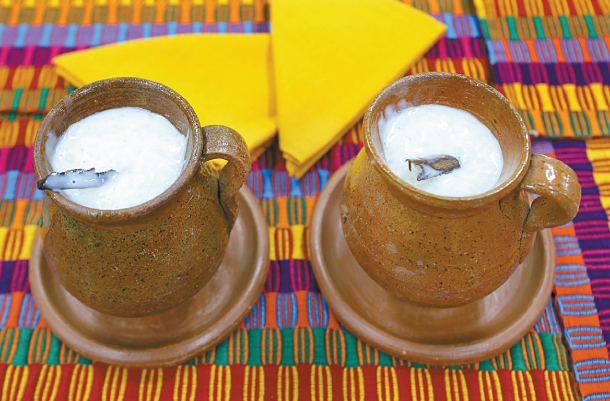 1. Pour 2 cups of water into a medium-sized pot. Allow the water to boil.

3. Cook rice until the consistency is soft and “spongy.”

4. Add 1 cup of milk, 1 can of evaporated milk, 1/2 tsp of salt, 1/2 cup of sugar and raisins (optional), stirring occasionally to ensure an even distribution of flavor.

5. Continue cooking the rice pudding on low heat until most of the milk is absorbed by the rice.